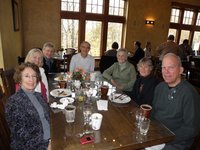 When 20-year-old Linda Meyers met a fellow Iowan at a summer Peace Corps training session in 1964, she couldn't have known that her life's adventure had just begun. She knew she was responding to President Kennedy's call for American college students to share their knowledge and gifts with the world. But the UI French major didn't know then that she and the Iowa State student she was shaking hands with, John Donelson, would start taking turns following and leading each other across the globe for the rest of her life. She didn't know that he would travel a thousand miles from his Peace Corps post just to visit her in Cameroon. She didn't know that, before her two-year commitment was up, she would ask for a transfer and the two would marry and serve out the rest of their time in Ghana. She didn't know that his biochemistry post-doc would have him in England while she began medical school in Iowa City -- while pregnant with their first child, a daughter, for most of that first year. She didn't know that Iowa City would become the family's home base as one, two and then three sons came on the scene. She didn't know that -- while spending a year at the foot of the Ngong Hills in Kenya -- her medical training would make her so fascinated with the death of Karen Blixen that she would begin a lifelong study of the Danish writer and self-publish the award-winning book, "Out of Isak Dinesen in Africa." She didn't know how her years would be filled with RAGBRAIs, triathlons, summers in Cape Cod, bird-watching tours on all seven continents and being in the delivery room when her first granddaughter came into the world. Nor could she have known what a wonderful caregiver her husband would turn out to be for the 2 1/2 years after she discovered several lumps in her neck that meant ovarian cancer had spread through her body. Linda Grace Meyers Donelson, M.D., died Oct. 8 nearly a month after her 69th birthday. The daughter of Roman Meyers and Lois Seuser, Linda grew up in Clinton, but called Iowa City home for more than four decades. She is survived by her husband John; her brother Paul; her sister Mary; her children Christina (Jeff) of Iowa City, Loren (Keegan) of San Diego, Lyn of Paris, France, and Emory (Kelly) of Santa Monica; her grandchildren L'Engle, Lucy, Miles, Leif and Ames; more than 50 of her first cousins; and many friends. Services celebrating Linda's life will be held beginning at 4 p.m. Saturday, Oct. 13, in the fellowship hall of St. Andrew Presbyterian Church in Iowa City -- with remarks by family and friends beginning at 4:45 p.m. followed by a reception. Graveside services will be held at 2 p.m. Sunday in the Glenwood Cemetery in Ogden, Iowa. Memorials donations can be made in Linda's memory to Iowa City Hospice and the Ovarian Cancer Research Fund. Online condolences can be sent for her family through www.gayandciha.com.