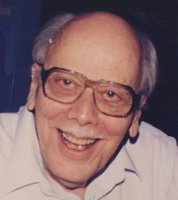 Paul G. Anderson, 93 former Professor of Music at the University of Iowa for many years died Thursday, October 1, 2015 at Oaknoll Retirement Community. Graveside services will be held at 11:00 am Monday, October 5, 2015, at the Oakland Cemetery in Iowa City where Military Honors will be provided. Paul was born March 24, 1922, in Des Moines, Iowa the son of Paul I. and Eva Matthews Anderson. Following graduation from East High School in Des Moines, he served in the United States Army during WWII. Returning to Iowa, he attended the University of Iowa where he received his Bachelor of Arts Degree in 1945, and a Master of Arts Degree in 1947. For over 40 years he taught horn at the University of Iowa retiring in 1989. On April 6, 1947, Paul was united in marriage to Betty M. DeMoss in Quincy, IL. The couple moved to Iowa City after their marriage and never left. While at the University, Paul was also responsible for teaching private lessons to the horn students. From this many fine students left to pursue very successful music careers teaching in schools and universities across the United States and Canada. He has published a number of articles and prepared computer programs in his field that are still recognized in the music world. Paul performed with the University of Iowa Woodwind and Brass Quintets, and he played principal horn with the Tri-Cities (now Quad-Cities) Symphony in Davenport. He served on the International Horn Society Advisory Council as secretary and president. His family includes two sons, Paul L. Anderson and his wife, Terri of Sycamore, IL; and Mark G. Anderson of Iowa City; grandchildren, Tracy Grote (Paul), Kelly Porter (Danny) and Patrick Lozier; great-grandchildren, Ben, Olivia, Owen, Devon, Hayes and Gus. Paul was preceded in death by his parents, wife, Betty; granddaughter, Kate Anderson; and brother, Earl Anderson.