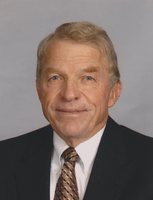 Funeral services will be held at 10:30 am Friday, September 6, 2019, at the First United Methodist Church in Iowa City, with burial at Oakland Cemetery.  (Sunday parking ordinance will be in effect for streets near the church)  Visitation will be on Thursday from 4 to 7 pm at Gay & Ciha Funeral and Cremation Service.  In lieu of flowers a memorial donation can be made to the First United Methodist Church of Iowa City or Iowa City Mercy Hospital Foundation in Dick’s memory.  To share a thought, memory or condolence with his family please visit the funeral home website @ www.gayandciha.com.

Richard Wilbur Oberman was born February 9, 1936, in Iowa City the son of Wilbur and Florence (Womer) Oberman.   He graduated from Iowa City City High School and later attended Iowa State University.  He served a tour of duty in the United States Army.  He married Joyce Kemp on October 13, 1962.  For most of Dick’s life he has been a farmer, farming near Hills.  He would share with you the many blessings in his life, first was his family and time spent with them.  Alongside of Joyce with their two children, grandchildren and later great-grandchildren; no sweeter words were heard by Dick than “Dad and Papa.” He cherished his friends, playing golf, fishing, spending winter in Manzanillo, Mexico, and simply being a man of the land; a farmer.

But Dick also believed in giving back, his active involvement in many agricultural, civic and church activities was proof of this.  Over the years he has been active in 4-H, Johnson County Extension Service, Pork Producers, Johnson County Planning Commission, Johnson County Health Council, Mercy Hospital Foundation Board, Hills Bank & Trust Board, Iowa Wesleyan Board of Trustees, CIVIC (Council for International Visitors to Iowa City, and the First United Methodist Church.