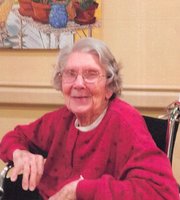 Vlasta M. Cameron age 99 lifelong resident of this area died Friday, January 31, 2020 in her home at Keystone Place in North Liberty. Funeral services will be held 10 am Monday, February 10, 2020, at Gay & Ciha Funeral and Cremation Service, with burial at the Oakland Cemetery in Iowa City. Visitation will be from 2 to 5 pm Sunday at the funeral home. In lieu of flowers memorial donations can be made in her memory to Iowa 4-H Foundation or Eastern Iowa Alzheimer’s Foundation. To share a thought, memory or condolence with her family please visit the funeral home website @ www.gayandciha.com. Vlasta Mary Frus was born July 4, 1920, in rural Johnson County, Iowa the daughter of George and Ella (Prizler) Frus. Vlasta was proud of her Czech heritage and was taught to speak Czech language before speaking English. She attended a one room schools north of Lone Tree and east of Hills before moving to Iowa City to attend high school. She lived and cared for her grandmother who lived on North Governor Street, which allowed her to attend the newly constructed City High School graduating in the first Class of 1938. Continuing her education Vlasta attended and graduated from the Iowa City Business College and began working for the Johnson County AAA (currently known as the FSA) during WWII and following until her marriage to William T. Cameron on June 4, 1949. The couple farmed on the westside of Iowa City where as a farmwife her days were filled with the daily chores, raising two sons, cooking, baking, and vegetable and flower gardening. Her fruit cellar shelves were always filled with the fruits from their orchards and vegetables from their large gardens. Many a baby calf or lamb were warmed and nourished in a box behind the kitchen wood burning stove. Life was difficult but few complaints were ever uttered. As a longtime member of Trinity Episcopal Church in Iowa City, Vlasta taught elementary Sunday School for years in the church. She was an active supporter in PTA at Roosevelt Elementary School where her sons attended. Vlasta growing up was a active member in the 4-H, as an adult she was a 4-H girls club leader giving back to an organization that she had fond childhood memories from. She was 50 years plus member of the Jessamine Chapter of the Order of Eastern Star, the Order of White Shrine Bethlehem Shrine No. 8, and the Order of the Amaranth Katherine Court #7, having held all offices throughout the years. Her family includes two sons, Harold (JoElla) and Ronald both of Iowa City; nephews, John Frus (Sondie), and Fred Frus (LuAnn); and numerous Grand and Great-Grand nieces and nephews. Also survived by numerous children whom Vlasta baby sat to whom she was affectionately known as “Grandma V”! She was preceded in death by her husband, William, and a brother and his wife, Hubert and Libby Frus. Vlasta lived a long and memorable life, but those memories and cherished moments were robbed from her in recent years by the progression of dementia. A heartfelt thanks to the staff, present and past of the Memory Care Cottage at Keystone Place on Forevergreen Road in North Liberty, where Vlasta resided as a Founding Club Member since November of 2016.