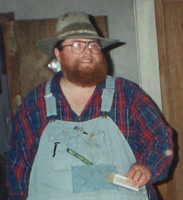 Mike “Maverick” Dewey, 52 lifelong resident of the Iowa City West Branch areas died Monday, April 20, 2020. Michael Robert Dewey was born October 11, 1967, in Iowa City the son of Thomas A. and Joan R. (Brown) Dewey. He attended West Branch Schools graduating from West Branch High School. Following high school, he attended Truck Driving School through Kirkwood Community College. This began a career in driving trucks and ultimately the beginnings of Maverick Trucking Company. Mike had been a member of the Iowa City American Legion and the Moose Lodge. He was born to be on wheels, at a young age you could always find him driving something as long as it had wheels! He enjoyed country western music, wearing his Stetsons, hosting serious 4th of July fireworks at his place, and simply talking and being with his family and friends. His family includes his mother, Joan Dewey; sister, Maria Dewey; Uncle, Chuck Dewey (Carol); Aunt, Marilyn Comandella (Robert) and his cousin, Cindy Comandella (Bruce Dennis). He was preceded in death by his father, Tom Dewey and cousin, Christi Comandella. Private family services have taken place with burial near his home at the Fairview Cemetery. In lieu of flowers please consider memorial donations to Mooseheart (mooseheart.org). His family would encourage you to send your memories, and condolences through the funeral home website @ www.gayanciha.com.