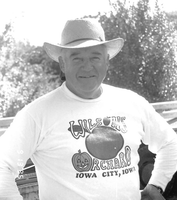 Robert B. (“Chug”) Wilson died Saturday afternoon 27 June 2020, at his family home outside of Iowa City. He was surrounded by his family when he passed. Chug was born on 25 July 1929 in Evansville, Indiana, to John B. and Virginia Barr-Wilson. He graduated from Iowa City High School in 1947, and from the State University of Iowa in 1952 with a Bachelor of Science. He was also a four-year football letterman. Chug was a saber jet fighter-pilot in the U.S. Air Force from 1952-1954 and commissioned as First Lieutenant. Chug married Joyce A. Gemmel-McKee on January 27, 1956, in Iowa City. The couple lived in Ottumwa from 1956-1957, where Chug taught science at the high school and coached backfield on the football team. From 1957 to 1972 Chug worked in his father’s business, John Wilson Sporting Goods in downtown Iowa City, where he developed team-sales to school district athletic programs in east-central Iowa. From 1973 to 1983, Chug and Joyce owned Wilson’s on the Mall Sports Shop at Sycamore Mall, which relocated to Eastdale Plaza until they sold their business in 1989. Chug and Joyce started Wilson’s Orchard north of Iowa City in 1980, which they owned until they retired in 2009, when they sold their business to the family of Paul Rasch and Sarah Goering. The Rasch-Goering family are expanding the business in innovative ways, but have kept the name “Wilson’s Orchard.” In retirement Chug enjoyed landscaping around his home, keeping a small orchard of fruit trees, and spinning stories for family and friends. Chug is survived by his wife, Joyce; sister, Sarah Wilson-Helt and her husband Paul; son Robert Wilson Jr. “Rob,” and Rob’s wife Mary Hurtado-Wilson; son James “Jim,” and Jim’s wife LeAnne Howe-Wilson; son Steven “Scott” Wilson; son Daniel “Danny” Wilson; grandchildren, Kathryn and John Wilson; granddaughter, Megan Wilson; grandsons, Joseph and Randal Craig, and great-granddaughters, Chelsey and Alyssa Craig; and great-great grandson, Denton Craig-Warren. He was preceded in death by his parents, by his brother John “Tug” Wilson, and by Tug’s wife Lucy McCaan-Wilson. Private family services have been held with burial at Memory Gardens Cemetery. A public service will be held at a date to be announced, at which time family and friends can gather to celebrate Chug’s life, share stories, and support one another as they remember Chug with a bite of apple and a toast of cider! To share a thought, memory, or condolence with Chug’s family, please visit the funeral home website @ www.gayandciha.com.