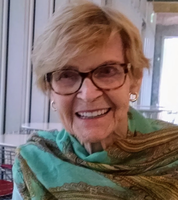 Ruth M. Kjaer, 91, of Iowa City died Monday, October 12, 2020, at Mercy Hospital in Iowa City. Ruth Marie (Jorgensen) Kjaer was born on July 5, 1929, to Marie and John Jorgensen in a farmhouse a few miles north of the Little Brown Church in Nashua, Iowa. She attended country school until the family moved to Cedar Falls, Iowa, where she attended Price Laboratory School and Iowa State Teachers College, now known as the University of Northern Iowa. Ruth married Theodore Niels Kjaer on August 19, 1949, in Cedar Falls, Iowa. She taught second grade for several months until illness struck. She left teaching and moved to Des Moines, Iowa, where her husband attended the Grand View Lutheran Seminary. They moved back to Cedar Falls while her husband received his teaching degree. While in Cedar Falls, they had three children and then moved to Elgin, Iowa, where her husband coached and taught school. In 1958, they moved to Mason City, Iowa, and had their fourth child. Ruth worked at Sears until 1969, when her husband accepted a teaching position at West High School in Iowa City, Iowa. She continued to work for Sears in Iowa City. In 1974, her husband was forced to retire on disability because of heart disease. At the suggestion of his physician, in 1978, they moved to San Diego, California, for the climate. Illness struck her husband again and they returned to Iowa City. Ruth then worked at The University of Iowa for the next 20 years, retiring in 1999. Her home was in Coralville, Iowa, from 1993 until 2005 when she moved to Iowa City. She remained in Iowa City until her death, which came just days after she proudly cast her ballot in the most important election of her lifetime. She is survived by her children, Kathryn Jeanne Kjaer, Joan Marie Kjaer Kirkman (Jay Semel), Jacqueline Ruth Kjaer, and her beloved fur baby, Dalilla. She had three grandchildren: Carolyn Joan Kirkman, Gregory Kjaer Kirkman (Theresa) and Kathryn’s son, Erik Ogunsanya. She had one great-granddaughter, Gwendolyn Rebecca Kirkman. Ruth was preceded in death by her husband, Ted, and granddaughter, Carolyn Joan Kirkman. Private family services will be held at a later date with burial at Memory Gardens Cemetery. In lieu of flowers donations can be made to the Carolyn Kirkman and Kjaer Family Fund for Colon Cancer Research c/o University of Iowa Center for Advancement or ActBlue.org. To share a thought, memory or condolence with her family please visit the funeral home website @ www.gayandciha.com.