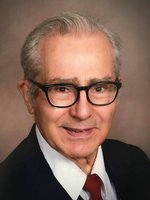 William “Bill” J. Fabritz age 86, of Solon, died Wednesday, November 11, 2020, Veterans Day! Public visitation will be held from 1 to 4 pm Sunday, November 15th. at St. Mary’s Catholic Church in Solon, concluding with Military Honors at 3:45 pm. Private family Funeral Mass will be held at 10:30 am Monday at the church. Bill’s service will be live streamed on Monday morning and can also be viewed later. To view please search “Remembering Bill Fabritz” on Facebook and request to join the group. In lieu of flowers a memorial fund has been established in Bill’s memory. To share a thought, memory or condolence please visit the funeral home website @ www.gayandciha.com. William Joseph Fabritz was born July 27, 1934, near What Cheer, Iowa the son of Carl and Edna (Doller) Fabritz. Following graduation from What Cheer High School, Bill attended and graduated from Quincy College, in Quincy, Illinois. He would later receive his Master’s Degree from the University of Iowa in Education. Bill married Mary Jean Davis on June 27, 1964 at St. Patrick’s Catholic Church in Iowa City. Soon after their marriage the couple moved to a farm near Solon where Bill was able to continue his passion of farming while teaching in area schools. Another lifelong passion of Bill’s was music, and both in schools and his church, St. Mary’s Catholic Church of Solon, Bill was very involved in the music programs. To compliment his teaching salary, he worked in Iowa City first at Sheller Globe, then for many years at Moore Business Forms, this becoming his primary job along with farming. In retirement he was recertified to teach and he was a substitute teacher in the area for a number of years. Bill served in the United States Army before his marriage, here of course he was in the military band. You see when you think of Bill, music is part of just who he was. Early in their marriage, Mary Jean would awake to the beautiful sounds of the harp, it was wasn’t from the heavens, but simply her husband, Bill practicing on one of the many musical instruments he had and was gifted to play. Some people collect baseball cards, antiques, cars; Bill collected many musical instruments over the years and he would tell you, he has some beauties! Bill was also an avid Iowa Hawkeye Fan no matter what sport it was. He was very active in his church, and also a founding member of the Steinbrech – Randall Council of the Knights of Columbus in Solon. His family includes his children, Jason Fabritz (Amarilis Lugo Pagan) and JoEllen Ritchie (David); grandchildren, Christian Ritchie, Gabrielle Ritchie, Davis Ritchie, Victor Fabritz Lugo and Nestor Fabritz Lugo; and an aunt, Rachael (Gangestad) Davis. He was preceded in death by his parents, wife, Mary Jean; and a sister and her husband, Mary and Dan Byrne.