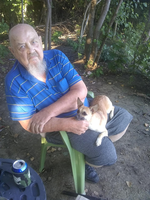 Joseph Vincent Mecum, 80, of Keokuk, Iowa died Wednesday, November 4, 2020. He was born on July 24, 1940 in Keokuk, IA. the son of Cecil E. Mecum and Eudora Mae Thompson Mecum Lawson. He is survived by brother Ron L (Sue) Lawson of Keokuk, IA, two sisters, Marcia A. Lawson and Ruth L. Lawson of Fort Madison, IA, Nephews John "Johnny" Edward Mecum Jr. of Fort Madison, IA, Jimmy E. Mecum of South Chicago Heights, IL, Ron L (Selena) Lawson of Keokuk, IA, Robert L Vaughan of Fort Madison, IA and nieces Jennifer Mecum Mercer of Burlington, IA and Jayne Eicher Klopfenstein of Burlington, IA, Great-niece Alyssa A Lawson and Great-nephew Alex J Lawson, numerous cousins all across the country and his beloved dog, Hensley. He was preceded in death by his parents, Grandmother (second Mom) Mabel Clark Thompson and Grandfather Winslow Chesterfield Thompson, aunts Ruby Thompson Daughters, Marie Thompson Stark, Mildred Thompson Burgess, and uncle Winslow "Winnie" Thompson, brother John "Jack" Edward Mecum, nephew Joseph M. Vaughan and niece Candina L Lawson, and significant other Shirley White. Joe entered the Navy in 1958 and traveled across the United States and around the world assigned to different ships including the USS Hector, USS Jason and USS Vega and being stationed in San Diego, CA, Oakland, CA, Great Lakes, IL and Stockton, CA through the years. His vocational training and experience while in the service included carpentry, engine mechanics, military instructor duty, gun range instructor and Crypto School. His military career ended in 1970 and he stayed in Stockton/San Jose area for over 30 years. Joe used the many skills that he learned in the service working different jobs as a contractor, construction, real estate agent and bartender. Joe moved back to Keokuk in 2000 to be near his family. Joe liked to go to auctions, yard sales and loved to collect things. He enjoyed making things like birdhouses and doing carpentry. He especially loved going fishing and was an animal lover. Joe loved to watch Western movies and documentaries. He would watch certain Western movies over and over and enjoy watching them every time Joe was a good cook and loved to barbeque. One of his specialties was home-made tacos and other Mexican foods. He would bring different dishes to family gatherings and enjoyed feeding people. He also liked to go out to the local restaurants for breakfast or lunch. He and brother Ron would go for breakfast at HyVee on Veterans Day and had collected their token stickers and coins from 2011 to 2019. Joe always said he liked to shop at HyVee for what they did for Veterans. You could also find Joe enjoying a beer at the local bars. He appreciated the camaraderie and atmosphere of bars and he worked as a bartender when he lived in California. Joe was a current and proud member of Keokuk Chapter of the American Legion Post 41. In lieu of flowers, memorials are suggested to the American Legion Post 41. Joe's service will be at the Keokuk National Cemetery on November 27, 2020, at 1:00pm with full military honors.