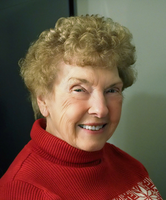 Catherine Grove Reiland, aged 96, died January 9, 2021, at Mercy Hospital in Iowa City, Iowa following a brief illness. Born June 3, 1924 on the family homestead near South English, Iowa, Catherine was the daughter of John and Alice Noffsinger Grove. She attended school in Kinross, Iowa, graduating from Kinross High in 1941. Following graduation, she moved to Cedar Rapids, Iowa, and worked in several defense plants during World War II, including Collins Radio. While living in Cedar Rapids, she met Virgil (Vic) Dorsam, who was attending Army Cadet School at Coe College. They were married in 1945 and had two children, Sandra Sue and John Edward. Following Vic’s discharge from the Army Corps of Engineers, in 1950 they moved from the Midwest to McAllen, Texas. Vic died in 1966, and she then returned to Iowa City to be near her family. Catherine took a position in Educational Placement at the University of Iowa, where she worked until her retirement in 1986. During that time she met and married Ray Reiland; they would have celebrated their 43rd anniversary in February. Following their retirement, they spent 20 years enjoying the warm winters of South Texas, and travelled across the country in their motor home with their camping club and friends from Ray’s Pearl Harbor Reunion Group. Catherine loved people, made friends easily, and cherished her many close friendships, including those made during their many years at the Tip of Texas retirement park in Pharr, Texas. She loved dancing, especially square and ballroom dancing. She played a serious game of cards, she loved to sing, and she loved to laugh; we will treasure the memory of those smiles and laughter. Catherine also deeply loved her large extended family, and was especially close to her three sisters and brother, Esther (Les) Claypool, Helen (Hugh) Jennings, Joe (Katherine) Grove, and Mary (Bruce) Hayes, who all preceded her in death. Catherine is survived by her beloved husband, Raymond (Ray) Reiland; a daughter, Sandra (Keith) Nykerk; a son, John (Barbara) Dorsam; Ray’s children, Paul (Debbie) Reiland, Tom (Karla) Reiland, Richard (Rick) Reiland, Ann (James) Stainbrook, and Michael (Karen) Reiland. Also surviving are two granddaughters, Michelle (Jon) Benson, Aimee (Tony) Carver; a grandson, Wesley (Amy) Dorsam; six great grandchildren; and more than twenty Reiland grandchildren and great grandchildren. Due to Covid restrictions, no memorial service is planned at this time. To share a thought, memory or condolence with her family please visit the funeral home website @ www.gayandciha.com.