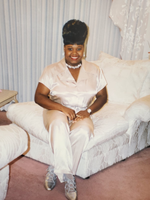 Grace Ann Marie Young, Gracie, as family and friends affectionately called her, was born on July 15, 1972, in Clarendon, Jamaica, West Indies, to Errol Hamilton and Beverly Johnson. She was the first grandchild of Mrs. Eulalee Hamilton. At the age of 1 year old, her Grandpa John and Grandma Eulalee took Gracie to live with them in Black River, St. Elizabeth. She grew up with her aunts and uncles. She attended Black River Primary and Secondary Schools. Her grandmother would later migrate to the United States, and at the age of 13 Gracie and her father joined her grandmother in New York. Gracie was always full of life, forever having a smile on her face. Gracie was like sunshine and had the uncanny ability to light up a room once she entered it. Gracie enjoyed cooking and baking, and you were guaranteed to be fed with delicious home cooking and taken care of as she was generous with hospitality when you entered her home. Gracie was loving, selfless, sensitive, and filled with warmth; she made us all feel at home in her presence. Family gatherings were always a fun time with her cousins. The cousins did everything together. These were traits instilled in Gracie at a young age as Grandma Eula saw to it that love, family, worship, school, and regularly attending church were steeped in the fabric of everyday family life. Gracie attended IS 72, Long Island City High School, and LaGuardia Community College. After college, she moved to Florida to work in her Aunt, Dr. Hamilton's office. On returning to New York, she met Horace Young, the love of her life, who she later married on July 20, 1996. Gracie and Horace later settled in Atlanta, Georgia, where they bought and maintained a beautiful home where they would start their journey as a married couple. Gracie went on to work as a recreation therapist in a nursing home. Their union produced three beautiful children, Asha, Zion, and Simeon. Horace, her husband, and her three children were Gracie's number one priority. Due to unforeseen circumstances the couple relocated to Iowa and after a while, she became ill. It is no wonder that Horace devoted his whole being to taking care of Gracie and their children during her illness. Gracie was the consummate optimist; she always saw the glass half full. All through her illness, she kept a positive attitude, always smiling, faithful, and thanking God for his goodness. Gracie was prepared and ready to meet her Lord, her Savior. Gracie, wife, mother, grand-daughter, daughter, niece, sister, cousin, your mission on this earthly plane has been completed. You have been called to a higher service. We can picture your smiling face as the angels welcome you into Paradise, where you will now help watch over the rest of us. Thoughts of you will bring us comfort and, yes, laughter as you were always so full of life. You will remain forever in our hearts. You are forever loved. May perpetual light shine on you. Grace Ann Marie Young is survived by: Husband: Horace Children: Asha, Zion, and Simeon Grandmother: Eululee Dad: Errol and Stepmother Winsome Sisters: Tennille, Jamie Brother: Earl Also, she leaves one nephew, aunts, uncles, and a multitude of loving cousins and other extended family members and friends.