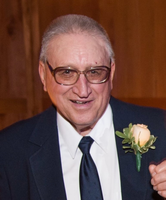 Roger D. Nielsen died on February 5, 2021. Roger was born on April 7th, 1934 in Manning, Iowa to Claus & Bernice Nielsen. He graduated from Manning High School in 1953 and started his college career in fall 1955 at Parson College in Fairfield, IA. While at Manning High School he participated in football, basketball, track, and baseball. He participated in the same sports at Parson College. He had the distinction of lettering in 13 sports at both Manning and Parson College. He was all-state in basketball in his senior year. While at Parsons he quarterbacked his team to an undefeated season his senior year. They won the Iowa Conference title. He was a guard on the basketball team. They also won the basketball conference that same year. He played shortstop on the baseball team and ran the 2 mile run for the track team. He graduated from Parsons in 1957 then spent 2 years in the U.S. Army - 4th Division. While in the Army Roger helped lead them to the 4th Armored division football championship and the 4th Armored Basketball Championship in Berlin, Germany. Roger left the service in 1959 and took a job at Parsons College as a coach for both football and basketball, he also helped with baseball. Roger married Barbara Knaack in 1957. They had two sons, Jeff Nielsen (Ruth dec.) of Iowa City, IA and Scott Nielsen (Kelly) of Mt Juliet, TN. Jeff has two daughters Brooke Amirov (Zhas) of Muscatine, IA and Morgan Berillo (Kyle) of Aurora IL. Scott has two children Megan Duval (Matt) of Blaine, MN, and Shane Nielsen of New York, NY. In recent years, Roger became a great-grandpa to three great-grandchildren; Aria Berillo, Ayana Amirov, and Aiden Berillo. Roger is also survived by a sister, Beverly Smith (Gary dec.) of East Moline, IL. Roger held various teaching, coaching and athletic director positions through the years at Midwestern College, Denison Middle School and High School. As a teacher and coach he touched countless lives before retiring. In 2004, Roger and Barb moved to Iowa City where he devoted his time to family. Roger enjoyed watching his grandchildren in extracurricular activities and was always the first one in the stands. He quickly became known around town as a grandpa to many and always had cookies or candy to share. He will truly be missed by all who knew him. No service will be held at this time. In lieu of flowers, the family asks that donations be sent to the University of Iowa Children's Hospital in honor of the deceased. To share a thought, memory or condolence with his family please visit the funeral home website @ www.gayandciha.com.