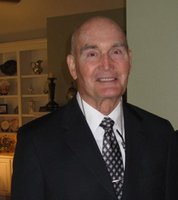 Donald E. Leaman, 82 longtime area educator died Monday, February 15, 2021, at The Bird House-Hospice Home of Johnson County. Funeral services will be held at 11am Friday, February 19, 2021, at St. Andrew Presbyterian Church in Iowa City where there will be a time of visitation one hour prior to the services. In lieu of flowers Don’s family encourages memorial donations to The Bird House-Hospice Home of Johnson County to continue to support the compassionate care they provided for Don and his family! To share a thought, memory or condolence with his family please visit the funeral home website @ www.gayandciha.com. Donald E. Leaman was born October 1, 1938, in Waterloo, Iowa the son of Paul and Susie (Kelley) Leaman. Following graduation from high school in Waterloo, he attended and received his BS and MA degrees in Education from the University of Northern Iowa. Don married Veral Jane Steele on August 12, 1962, in Waterloo. The couple had been sweethearts since high school and like Don, Veral also received her degree in Education from UNI. Don’s long career in teaching began in Newton, Iowa where he taught for 7 years before moving with his family to Iowa City where he taught in the Iowa City Community School System over 30 years before retiring in 1998. He taught mathematics at both Northwest Junior High and West High School during this time. A career that he cherished and developed lifetime friendships with students and fellow educators. His wife, Veral died in February of 2006. Don was blessed with a second marriage to Mary Margaret Hunt on October 19, 2008. Don enjoyed so much in his life, first and foremost was his family, friends, and students. He had always appreciated the outdoors, an avid fisherman, hunter and golfer. He and Veral shared the love of dancing, and this is where he met Mary Margaret after Veral’s death, dancing. He was a member of St. Andrew Presbyterian Church, Elks Club, Lions Club, National Council of Teachers of Mathematics, Iowa State Association of Math Teachers, Kappa Delta Lambda Honorary Science Fraternity, the University Math Club, and of course his dance groups, East Central Association of Square and Round Dancers and the Round Dance Association. Don was never bashful about giving back to those around him, often stepping up in leadership roles to support what was important to him and those he cared so much about. A quiet, quick wit sense of humor, wise with wisdom, intelligent but very down to earth, very loving man that loved and was loved by all who knew him. His family includes his two daughters and their husbands, Donna and Jeff Aubrey and Ellen and Rev. Dr. Tim Stidham; grandchildren, Ryan Aubrey (Hannah), Brandon Aubrey (Jenn), Sarah Stidham and Rachel Stidham (Jon Zatorski). Don was preceded in death by his wives, Veral and Mary Margaret; and sister-in-law, Joyce Siddens.