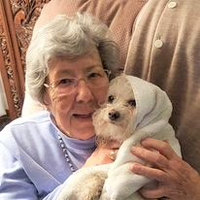 LaVerne (DeeDee) Couch, 91, died peacefully at home on Friday, February 26, 2021. A gathering of family and friends to remember, share and celebrate DeeDee’s life will be held from 12 noon till 3 pm Saturday, September 11, 2021, at Gay & Ciha Funeral and Cremation Service. DeeDee was a wife, mother of four, and long-time teacher at Riverside Elementary School. She was born to Louis and Bernadette (Boisvert) Heideman in Des Moines on Friday 13th, 1929. DeeDee always believed thirteen was her lucky number. She grew up in Des Moines and graduated from St. Joseph Academy in 1947. DeeDee's family included four children: two daughters, Susan Baumann and Rebecca Couch, both of Iowa City, and two sons, Steven Couch (Irina Ivanova) of Santa Clara, California, and Michael Couch of Cumming, Iowa. She was the proud grandma of five: Matt Baumann, Jon Baumann, Yuri Ivanov, Andrew Couch, and Carl Couch. In addition, she had four great grandchildren and five great-great grandchildren. Her joyful companion, Babe, was by her side until the end. She was preceded in death by her husband, Carl J. Couch, her sister, and two brothers. DeeDee had an eventful life, living in many places. On September 20, 1947, she married Carl. DeeDee worked hard to put Carl through undergraduate and graduate school, having four children along the way. They then moved a number of times as Carl taught at four different universities over the years. The first teaching position was at Montana State University, which led to DeeDee's love of the mountains. Like many married women, DeeDee attended several different colleges, getting her B.A. in 1971. She then began teaching at Riverside Elementary School, finishing her career as a fourth-grade teacher. In later years, when she was about town, she often would run into her former students, who were always eager to visit with her. DeeDee had numerous hobbies, including rock collecting, fishing, and being in the mountains. For many years, she and Carl had a cabin near Big Timber, Montana, where they entertained family members and friends in the summer. Her children and grandchildren have many stories of hiking the mountains, fishing poles in hand. DeeDee was an excellent bridge player and enjoyed games of all kinds, especially with her family. She was proud to be a Life Master in bridge. We miss her. In lieu of flowers, memorials may be sent to the American Society for the Prevention of Cruelty to Animals, American Civil Liberties Union, and The Arthritis Foundation. To share a thought, memory or condolence with her family please visit the funeral home website @ www.gayandciha.com.