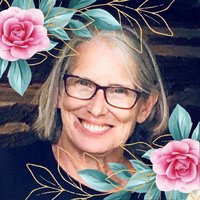 Lelah “KK” Carol Siefken, 68, was born March 12, 1953, in Storm Lake, Iowa, and grew up on her family’s farm just outside the nearby tiny town of Rembrandt. She was the third child out of ten, and enjoyed countless adventures with her six sisters — Maggie, Nancy, Jan, Karen, Paula, and Susie — and three brothers — Jay, Tom, and Greg. Her family always called her by her middle name, Carol. She was definitely a tomboy and took serious issue with being relegated to chores in the house with her mom and sisters instead of being allowed to take on the more physical farm jobs with her dad and brothers. Lucky for her, no one escaped the arduous tradition of “walking the beans.” In high school, Carol participated in sports, and after graduating in 1971, she went to nursing school in Sioux City. In 1975, she welcomed her only child, a sweet son she named Chad Eric Siefken. They made their lives mostly in Sioux City and Council Bluffs. Tragically, in 1991 at the age of 15, Chad was killed. His loss was devastating and continues to deeply affect the lives of Carol’s siblings and their families. In 2005, Carol moved to Washington, Iowa, where her sister, Nancy Falline, lives with her husband, Dennis. Carol soon became an honorary Falline and blessed her niece, Robyn, her nephew, Jake, and their children with so, so much love. It was Jake’s first son, Christian, who gave her the nickname “KK” when he was learning how to talk in 2009. It stuck, and she was known by that family moniker ever since. Robyn’s young daughter, Noelle, once told her mom that she loved her “more than a hundred KK’s”, which was understood to be an unimaginably vast amount. Carol made a mean lemon meringue pie. She gave thoughtful gifts. She cared about the planet and social justice. She loved good music, especially the blues. She also loved being outside: canoeing, fishing, biking, gardening, mowing, and enjoying long meandering walks through nature. She stayed quite active until mid-2020 when symptoms of leukemia began. Carol died May 1 in Iowa City at the Bird House hospice. In her final days, several of her siblings were able to visit and say goodbye. She was preceded in death by her son, her parents (Richard and Norma Siefken), a brother (Jay Siefken), and a niece (Emily Thompson). She is survived by eight siblings as well as many nieces, nephews, and their children. Carol will be greatly missed, and her legacy of gentle love, good humor, strength, and resilience will live on in her family forever. A Celebration of Life will be held at 1 p.m., Saturday, June 26th at Gabrielson Park- Gustafson Lake, (1311 440th Street Sioux Rapids, IA). To share a thought, memory or condolence please visit the funeral home website @ www.gayandciha.com.