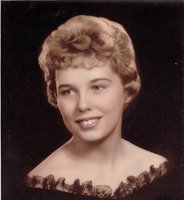 Jacqueline R. Beck, age 78 of Cedar Rapids, formerly of Iowa City, died Sunday, June 6, 2021, at Mercy Hospice House in Cedar Rapids. Funeral services will be held at 9 a.m. Friday, June 11, 2021, at Gay & Ciha Funeral and Cremation Service in Iowa City with burial to follow at the Oakland Cemetery in Iowa City. Memorial donations can be made in her memory to the University of Iowa Hospitals and Clinics, Stead Children’s Hospital. Services at the funeral home can be viewed by family and friends through the livestreaming feature on the funeral home website at http://www.gayandciha.com listed under her obituary. Jacqueline Rae Guinn was born in December 1942, in Belle Plaine, Iowa, the daughter of Jackson and Eloise (Denune) Guinn. Growing up in Belle Plaine she attended and later graduated from school there and attended Marshalltown Business College. On September 2, 1962, she married Arnold “Jim” Beck in Belle Plaine. Not only did Jackie raise their children, she and Jim cared for over 50 children through foster care and daycare in their home over the years, and she was able to still work outside the home for Amana Refrigeration and later Moore Business Forms. It goes without saying, Jackie truly loved children, and many of the foster children kept close ties with her and Jim as they grew up. When not busy with day-to-day tasks, Jackie enjoyed supporting the Iowa Hawkeyes, Chicago Cubs and the Los Angeles Dodgers. She was an avid reader, never stopped learning, liked to play cards and other games, spend time outdoors, camping, vacations or simply a car ride, but most important in her world was her family, including the many foster and daycare children. Her family includes her children, Steve Beck (wife Susan), Brian Beck (wife Joan), Jeff Beck (wife Marjorie), Ron Beck (wife Brigid), John Beck (wife Damaris), Jenni Barker (husband Jason) and Sara Kiser; grandchildren, Jonathan, Joshua, Megan, Justin, Emily, Eleanor, Ryan, Samuel, Daniel, Lucas, Alexandra, Christie, Emma, Madeline, Genevieve, Magdalene, Isabella, and Georgia; a great-granddaughter, Loraine; and Jackie’s sister, Marcia Kucera (husband Marvin). She was preceded in death by her parents and her husband, Jim.