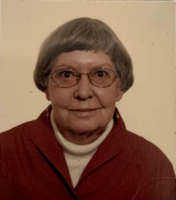 Annis Catherine Hulme of Iowa City died Saturday morning, June 19, 2021, surrounded by her family. A memorial service for Ann will be held at New Song Episcopal Church in Coralville, IA on July 17, 2021, at 1 pm. A celebration of her life will follow at 2:30 pm, in the lobby of Coralville Center for the Performing Arts - 1301 5th Street Coralville, Iowa. Please join her family for both or either event. In lieu of flowers, the family suggests memorial donations to New Song Episcopal Church or to Iowa City Hospice. Ann had a long and varied career, consisting of three parts. She graduated from University High School in 1948, and from the University of Iowa in 1952 (BA, Spanish, cum laude; Phi Beta Kappa). In her first career she raised five children. Her success is shown by the fact that the five remain close friends to this day. Ann’s career at the University of Iowa, her second phase, began in 1972. She began as a secretary in the Dept of Psychology, advancing through the ranks to Program Coordinator in the Center for Credit Programs. She retired from the University in 1995. In her third career, she served as program coordinator and administrator of New Song Episcopal Church, beginning in 1995. She was an early member of this church, was a pioneer in New Song’s mutual ministry, and was always a devoted volunteer at the church. She spent countless hours visiting the sick and shut in. In addition, she was a mentor in the Education for Ministry program of the Episcopal Church for many years. Her friends at New Song will attest to her life of love and service. Annis Catherine Howell was born to Sara Alta Coplin Howell and Henry H. H. Howell in Florala, Alabama, on March 17, 1930. When her father died in 1941, her mother, Ann, and her sister Janis moved to Birmingham so that her mother could attend Montevallo State. After Mrs. Howell’s graduation, the family moved from Alabama to Iowa City. In Iowa City, her mother earned a master’s degree and Ann and her sister graduated from University High School. Ann was married to Thomas S. Hulme from 1949-1976, living in Iowa City, Boone, IA, and Cedar Rapids before returning to Iowa City in 1968. Ann is survived by her family and legion of friends. Her family includes her four daughters: Sara Hulme (Michael Hardy) of Pittsboro, NC; in Iowa City, Emily Mellecker (Patrick), Janis Russell (Rip), and Mary Hulme. Her son, Stephen Hulme (Gloria) lives in Raleigh, NC. Ann’s grandchildren include Matthew Kostiv, of Iowa City and Jacob Kostiv, of Marion IA; Joey Podhajsky (John) of Terrell, NC; Rebecca Lemonds of Tampa, FL; and great-granddaughter, Ella Podhajsky. Ann was preceded in death by her father, Henry H. H. Howell; her mother, Alta Howell; and her sister Janis. Ann’s kindness, love of life, and lifelong love of learning profoundly influenced her family and delighted her countless friends. Hers was a life well-lived. Her family, church and community – the focal points of her long life – will be forever in her debt.