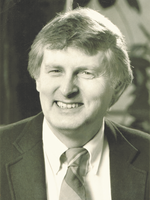 Larry C. Bruse, age 83, longtime employee of the University of Iowa Foundation, died Saturday, July 24, 2021. Larry Chris Bruse was born on a farm near Preston, Iowa, the son of Wilbert and Laura (Michaelsen) Bruse. Following graduation from Maquoketa High School in 1955, he began occasional work with Clinton Engines Corporation (ending in 1960), continuing on to work with Aluminum Company of America until 1961. He enlisted in the Army in 1956, shortly after the end of the Korean War. During this time Larry became a helicopter crew chief on a Sikorsky H-34 Choctaw. He was additionally recalled to active duty status in 1961 during the Berlin crisis and the building of the Wall. Following an honorable discharge in 1962, Larry attended the University of Iowa where he received his BBA in Finance and minored in Accounting. Larry then found a career with the University of Iowa Foundation, ultimately retiring as Treasurer and Director of Finance and Data Services in 1999. Larry was always looking for more ways to support the people and businesses of his community. He was a founding member of the Bicyclists of Iowa City (BIC), and he helped establish a number of non-profit organizations within the community, including the Iowa City Public Library Foundation and the Iowa City School District Foundation. Being a farm boy at heart, he supported local farmers and the local food movement, serving on the board of the New Pioneer Co-op and frequenting the weekend farmer's market. He was also a committed and diligent volunteer for numerous other community non-profit organizations. Larry enjoyed much in his life, and was never afraid to jump headfirst into a new hobby; the extensive list included most sports (especially bicycling, tennis, and racquetball), chess, carpentry, photography, interior design, and most notably, cooking. He loved fine food and wine, especially when shared with his many close friends. He gravitated toward any activity that included a social atmosphere, making new acquaintances wherever he went. He had a passion for new experiences, which he found through global travels. In each personal interaction he showed his pride in being a Hawkeye, bleeding black and gold for both athletics (football, basketball, and wrestling, among others) and the arts (from dance to photography to theater). His family includes his children, Christine Bruse, Telly Presho (Scott), Larry "Corey" Bruse (Yoko Noguchi), Nicole Neira (Scott), and Jessica Monson (Chuck); 7 grandchildren, Erin and Megan Kasik, Russell and Zoe Presho, Vivienne Neira, and Olivia and Iris Monson; his siblings, Gail Beck (Rex), Linda Rotman, and Steve Bruse; and his special friend, Susan Griffith. Larry donated his body to the Deeded Body Program at the University of Iowa Carver College of Medicine as his final gift to humanity. It is anticipated that he will be recognized in the 2022 memorial service at Oakland Cemetery. Ongoing updates of additional commemoration will be posted to the Gay and Ciha Funeral and Cremation Service website. In lieu of flowers, the family suggests making donations in Larry’s honor to Hancher Auditorium or a UI museum or collection (see: https://uiowa.edu/museums-and-collections).