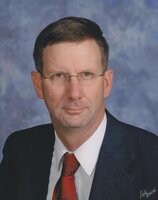 David E. Brogla, age 60 lifelong resident of the Iowa City Coralville area died Friday, September 10, 2021, at the University of Iowa Hospitals and Clinics. Funeral services will be held at 10am Wednesday, September 15, 2021, at St. Mary’s Catholic Church in Iowa City, (Sunday parking ordinance will be in effect for the streets near the church) with burial to follow at the Oak Hill Cemetery in Coralville. Visitation will be from 4 to 7 pm Tuesday at Gay & Ciha Funeral and Cremation Service. Memorial donations can be made in David’s memory to the Regina Foundation. To share a memory, thought or condolence please visit the funeral home website @ www.gayandciha.com. David Eugene Brogla was born November 10, 1960, in Iowa City the son of Donald R. and Margaret L. (Yoder) Brogla. David attended Coralville Central until entering Regina in the seventh grade where he graduated from high school in 1979, having been a National Honor Society recipient. He then went on to the University of Iowa receiving his degree in business. His working career began with General Mills, then began a long career with Proctor & Gamble and later Oral B all in Iowa City. Health reasons forced him to retire much earlier than he would have ever wanted to. His mother said it best, David has liked anything with a ball since he was a child. Growing up in Coralville he was always in baseball’s little league, babe ruth and at Regina on both the baseball and football teams. He enjoyed playing golf, softball, anything Hawkeyes, the Chicago Cubs and the Cedar Rapids Kernels. And most memorable for him and his family were their trips to Hawaii, many cherished memories created. David was preceded in death by his father, Donald on August 16, 2009, and a number of other family members. His family includes his mother, Margaret Brogla; brother and his wife, Michael and Susan Brogla; two nieces, Lindsey Brogla (Rameo Riojas) and Courtney Brogla; one nephew, Tyler Brogla; one uncle, Paul Brogla and a number of cousins.