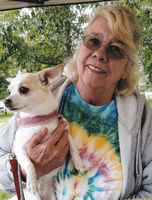 Janet M. Walsh, 71, of Iowa City, died December 3, 2021, from a short battle with Cancer, she was surrounded by family at her time of passing. A visitation time will be held from 1-4 p.m., Sunday, January 2, 2022 at Gay & Ciha Funeral and Cremation Service. In lieu of flowers, memorials can be made to the Janet Walsh Memorial Fund. Janet was born February 17, 1950, to Roy & Ester O'Leary of Iowa City, she lived & attended school here before marrying Tom Walsh June 20, 1967, in Elizabeth City, NC. They lived in Indiana for approximately 10 years then moved back to Iowa & raised their 2 children. Janet worked as a housekeeper in a couple local motels before going to work at the University of Iowa in 1995. She retired from the Uof I in 2019. During her retirement she enjoyed going to yard sales & watching westerns & cooking shows with Peaches. She looked forward to her weekly lunches & shopping time with her granddaughter Shyniece & great granddaughter Grace. Her immediate family includes her son Ray (Dawn) Walsh, daughter Laura (Jim Russell) Walsh & family, 6 grandchildren, 7 great grandchildren and 7 siblings, Allen O’Leary, Donna Yeggy, Eldon O’Leary, John O’Leary, Barbara Butler, Dennis O’Leary and Roleen O’Leary. Greeting her in Heaven are her husband Tom, both her parents, 3 siblings, Patricia Eis, Gary O’Leary, and Ralph Niemeyer, and a niece & Shasta.