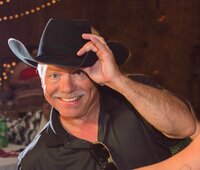 Joel Alan Tresslar, 54, passed away Monday, March 28, in his home. Joel’s home is a place filled with joy and laughter where everyone is always welcomed and gatherings happen regularly. Joel and his wombmate, Teri, were born on January 7, 1968, in Washington, Iowa to parents Connie and Rick Tresslar, and the twins were followed soon after by their brother, Dustin (DR). Joel met the love of his life, Jill Roberts Tresslar, for the first time when they were in sixth grade. At that time, Joel thought himself a ladies’ man and too cool for school so Jill held him off until they were 14. Jill lived in Washington state and visited her grandparents in Iowa in summers so they were pen pals during the school year and spent summers together until Joel moved to Washington to be with Jill in 1987. They wed on Sept 9, 1989. Joel never knew a stranger. He befriended everyone he met and was beloved by all who knew him. He was known for his wonderful storytelling. He could spin a story out of any event and remembered names and dates going back to childhood. He had a way of starting a story, telling three more in between, and forgetting the original story before the end was complete. A bronc rider who grew up in the rodeo community, Joel hung his chaps up after suffering a couple broken legs but he still spent time assisting other cowboys every time he got a chance. A good rodeo or his own stories of the rodeo made him light up like nothing else. He loved anything cowboy and wrestling from movies to books. Joel loved to sing and he would serenade anyone within earshot. A 30+ year employee of the University of Iowa, Joel was a steadfast supervisor for Central Receiving in General Stores and Purchasing. Joel was the gentlest, kindest man and a role model to many people, young and old. We could all take lessons in patience and huge heartedness from how he lived his life. Joel and Jill had two amazing daughters, Jessica and Jaylinn, and granddaughter, Jaycee, who he loved more than life itself. He was extremely proud of them and made sure everyone knew it. Joel is survived by his wife, Jill; daughters, Jessica (Kurtis) Eiselstein and Jaylinn Tresslar; his granddaughter, Jaycee (Sweetpea); mother, Connie Tresslar; and father and step-mother, Richard and Melinda Tresslar; siblings, Teri (Mike) Accola, and Dustin (Jill) Tresslar; nieces and nephews, Olivia and Cole Accola, and Dillon, Hunter, Delaney, and Dempsey Tresslar; many aunts, uncles, cousins; and lots of dear friends who he thought of as family. Those who knew and loved Joel are invited to join the family for an open house celebration of life to be held on Saturday, April 16, from 1-4pm at Bobbers Bar & Grill, 1850 Scales Bend Rd. NE in North Liberty. In lieu of flowers memorial donations can be sent for his family to Gay & Ciha Funeral and Cremation Service @ 2720 Muscatine Avenue, Iowa City, IA 52240. To share a thought, memory or condolence with Joel’s family please go to Gay & Ciha Funeral and Cremation website @ www.gayandciha.com and click on Joel’s page. Good ride, Cowboy, good ride.