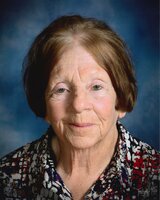 Susan J. (Sherlock) Sandersfeld, age 81 of Oxford died peacefully in her sleep Friday, April 8, 2022, at her home. Funeral services will be held at 10am Tuesday, April 12, 2022, at St. Mary’s Catholic Church in Oxford, with burial to follow at Mt. Calvary Cemetery near Oxford. There will be an hour of visitation prior to the services at the church. In lieu of flowers memorial donations can be made in her memory to the Oxford Fire Department. Susan Jane Sherlock was born December 10, 1940, in Iowa City, Iowa the daughter of James and Marguerite (Thompson) Sherlock. She attended schools in Oxford, graduating from Oxford High School with the Class of 1959. While in high school, she one of the great players of the team in 6 on 6 girls’ basketball. For many years Susan worked for Owens Brush, later Oral B. During her daughter’s school years Susan stayed at home and made their home, home. Later she worked at a few jobs including Old Country Buffet in Coralville. She was a member of the St. Mary’s Catholic Church, the church auxiliary, she enjoyed taking meticulous care of her home and yard, liked watching Iowa Hawkeye sports, especially the Ladies Basketball Team, bringing back memories of their glory days at Oxford High School! But near and dear to her heart was her family, especially when the grandchildren came along. Her family includes her daughter, Stacey Moran and her husband, Toby; two grandchildren, Alexa and Chase Moran; Susan’s brother, James “Skip” Sherlock and Susan’s former husband, Kenneth Sandersfeld. She was preceded in death by her parents and a sister-in-law, Myrna Sherlock.