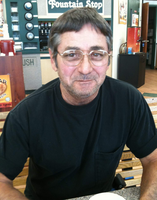 Joseph Charles Breno II of Iowa City passed away on Sunday May 15th. Funeral services will be held at 11 a.m. Thursday, May 19, at Gay & Ciha Funeral and Cremation Service in Iowa City, where there will be a visitation period from 9-11 a.m. until services Thursday morning at the funeral home. Burial with military honors will take place at 2:30 p.m. Thursday at Rock Island National Cemetery, Rock Island, Ill. Joe Breno was born October 12, 1948, in Fort Dodge, Iowa. He is the son of Joseph and Norma Breno. Joe volunteered to join the Army where he was stationed around the world and had the opportunity to serve in Germany and France. He was also stationed in Asia and fought in the Vietnam war. After returning from the war, Joe met and married the love of his life, Susanna Gorvin, on June 8, 1973. The couple lived in Colorado for over 20 years, where they raised their two children, Angelina and Joseph III. Joe enjoyed riding his motorcycle and tinkering in the garage, working on his trucks and cars. Always the entertainer, he was a master joke teller with his witty smart-ass sense of humor. Joe was an avid fisherman and could make a mean pot of goulash, but his favorite way to spend his time was spoiling his grandchildren. He loved to attend his grand-daughters softball games, volleyball games, soccer matches, dance recitals, Band and choir concerts, art shows, school plays, school musicals, prom grand march, you name it. If his grand-daughters participated, he wanted to be there to cheer them on! His family includes his daughter, Angel Pokorny (Michael) of Iowa City; son, Joseph Breno III (Melissa) of Greeley, CO; his six grandchildren, Aspen, Skylar, Breckyn, Joseph C. IV, Allyana and Keegan; siblings, Mary (Terry) Davis, Patricia Breno, Cindy Adams; Sisters-in-law, Pat (John) Grosvernor, Connie (Roger) Mullinnix, Cindy Gorvin, Maureen Irish-Gorvin; brothers-in-law, Paul Gorvin and Don Gorvin. He was preceded in death by his parents, his beloved wife, Susanna Breno, sister, Paula (Mike) Kinyon; sister-in-law, Barb Irish-Gorvin, Pam Escher, Paula Gorvin; brother-in-law, Bruce Gorvin, James Gorvin II, Michael Gorvin, John Grosvenor. In lieu of flowers, a memorial fund has been established in Joe's memory. For a complete obituary and to share a thought, memory or condolence, please visit the Gay & Ciha Funeral and Cremation Service website at www.gayandciha.com.