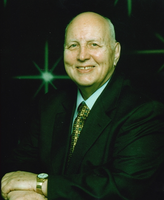 Richard “Rich” K. Schmidt, age 87 of Iowa City died Wednesday, June 1, 2022, at the University of Iowa Hospitals and Clinics. Richie was born to the parents of Richard “Dick” Frank Schmidt, a blacksmith by trade and Vina Kalkwarf Schmidt in Wellsburg, Iowa at home on November 3, 1934. Richie was raised in Wellsburg and graduated from Wellsburg High School in May of 1953. He was involved with his class of 1953 as class president, editor of the 1953 Annual Class Report, sang in the choir, quartet, acted in plays and in sports played basketball and baseball. During these years he had a Dad who had a stroke while at age 5 and by age 11 his Dad had passed away. Mom and the family helped raise him along with his best friend, Gary’s parents, Martin and Marge Boeke. No one in Richie’s family ever went on to college, however the Wellsburg High School Superintendent saw Richie’s potential and had him take college prep courses in high school. In 7th & 8 th. grades his teacher, Doris Linderman was a tough teacher and made him work for better grades. Richie worked when he could as a laborer while in school. His jobs included working with farmers and especially his brother-in-law, Floyd Senning and with Ken Lindaman at the lumberyard. He also drove a school bus. In 1954, Rich’s sister and husband, Nadine and Guy Railsback gave him a break that he needed. They took him in at their home in Pico-Rivera, California in exchange for household duties and helping with the kids. This led to the use of a 1939 Chrysler Coupe for going to college at East L.A. Junior College. Rich had to work, and he did at a Mobil gas station and this provided gas and oil for the ’39 Gray Goose. “At the end of the semester, a young girl in Grundy Center kept being in my head that I missed”. So he went back home to work for Floyd and Betty Senning, a block away from Mary Lou Mooty. “Then in January of 1955, I volunteered for the United States Air Force. After basic training I came home to marry my Mary Lou Mooty on April 24, 1955. After my leave, I went to Biloxi, Mississippi for training in electronics. Another leave, I was sent to Tripoli, Libya to the Wheeler Field Air Force Base for a year and half assignment. Back to Midwest City, Oklahoma to Tinker Field, a depot repose station. Mary and I liked this. Only to find SAC called me to come to Mountain Home Air Force Base, Mountain Home, Idaho. January 1959, I received my Honorable Discharge, and we were off to the University of Iowa for my degree in Business Administration. During my college years I sold Cutco knives to help pay for school and other things. I graduated in June of 1962 and took a job with Bank of America for a short time when I was needed by my mother back in Wellsburg. Found a job with the Iowa Department of Transportation in Ames. I resigned to take a job in accounting at the University of Iowa in August of 1963 through the years I held different positions such as the first Internal Medicine Administrator, career as an accountant at the University of Iowa, Internal Medicine Business Manager; Administrative Assistant to Dean of Medicine. I enjoyed the work at the University of Iowa. Was involved with much of the planning of many major projects during my career. These include but not limited to Finishing the BSN Building, Eckstein Building, Medical Research Center, Medical Labs, Bowen Science Building, Psych Hospital, Physical Therapy Plant, Oakdale “Temporary Building”, Medical Education Research Building, Oakdale Research Space, and the College of Preventative Medicine. Helped numerous researchers with lab space and renovations. Established standards that are still in use for so many of the ways projects move forward to completion. I retired on June 30, 2006”. Rich’s love for sports was evident to any who knew him. He could be found at countless Iowa Football games, men’s and women’s basketball games cheering loud for the Hawkeyes! He loved his Red birds, the St.Louis Cardinals, and a crack of the bat or a great play especially when at a live game surrounded by family or friends. The Green Bay Packers had the same story as one could hear Go Pack Go while watching them on tv. Rich cheered and clapped even louder at any event his grandkids were part of. If appropriate you would hear his whistle at sporting events when they had a good play or just to make sure you knew he was there. He loved listening to his grandkids at countless music events from elementary through high school. Sometimes you may have even caught him tapping his heel to the beat of the music. Or you could see him grin from ear to ear during the grandkids church and school related plays. He was always amazed by the grandkids' art abilities. Rich’s family includes his wife, Mary “Mary Lou”; their daughters, Karla Schmidt; Amy Schmidt-Rundell and her husband, Jason; and Rich’s pride and joy as “Opa” his grandchildren, Wes, Trenton, Spencer, Heidi, Kaitlyn, Erin, and Emmitt. Rich was preceded in death by his parents, son, Timothy; siblings, Louise Ross, Betty Senning, Bill Schmidt, Nadine Railsback and Elaine Lindaman. Funeral services will be held at 10am Saturday, June 11, 2022, at St. Andrew Presbyterian Church in Iowa City. Burial with Military Honors will be at 3 pm Saturday at the Rose Hill Cemetery in Grundy Center, Iowa. Visitation will be from 4 to 7pm Friday at Gay & Ciha Funeral and Cremation Service in Iowa City, and also one hour prior to the service Saturday at the church and during the reception following the services. In lieu of flowers memorial donations can be made in Rich’s memory to St. Andrew Presbyterian Church, Iowa City; United Presbyterian Home, Washington, Iowa; or Wellsburg Public Library, Wellsburg, Iowa. To share a thought, memory or condolence with his family please visit Gay & Ciha Funeral and Cremation Service website @ www.gayandciha.com.