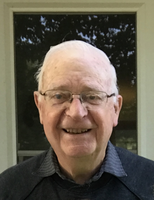 James Edward Divelbiss of Coralville, age 88, died at home on Friday, June 17, 2022, surrounded by his family. Jim was born on October 12, 1933, in Pueblo, Colorado. He was the son of James Herbert and Charlene Belnap Divelbiss. He graduated from Central High School in Pueblo and earned a bachelor’s degree at Westmar College in Le Mars, Iowa. Jim completed a Masters and PhD degree at the University of Iowa and earned a Master of Divinity from Evangelical Theological Seminary in Naperville, Illinois. His career path took him back to Westmar College where he was a professor in the Department of Biology for 24 years. During his tenure at Westmar, he was awarded multiple National Science Foundation awards which afforded him opportunities for travel and research. He also enjoyed his involvement in biology student trips to Arizona, California, Mississippi, the Boundary Waters, and the Philippines. In 1985, Jim returned to the University of Iowa where he worked in the Cytogenetics Laboratory and taught in the Biology Department until his retirement in 1997. Jim married Myrleen (Myrt) Thompson on August 21, 1954, in Des Moines. His survivors include his wife Myrleen, daughters Debra (Charlie) Kucera of Cedar Rapids, Diane (David) Spicknall of Iowa City, Janet Divelbiss of Iowa City, and son Brian (Karen) Divelbiss of Leawood, Kansas. He is also survived by sister RoeZanne Woelfle of Longmont, Colorado, brothers Douglas Divelbiss of Roseville, California, and Donald Divelbiss of Colorado, grandchildren Daniel Spicknall and Karen (Matt) Strabala of Iowa City, Andie Divelbiss of New York City, Ben Divelbiss of Leawood, Kansas, great-grandchildren Atticus and Ellis Strabala of Iowa City, and a large extended family. He was preceded in death by his parents, and sisters, Frances Lutz of Pensacola and Phyllis Lister of Pueblo. Jim was involved with multiple organizations to include Sertoma, Alpha Chi Honor Society, and Little League baseball. He coached tennis at Westmar College, and he and Myrt won many mixed doubles tournaments. He was a wonderful teacher and a loyal friend to many. He loved the great outdoors, travel, photography, playing games, singing in the choir and worshiping with his faith community at Coralville United Methodist Church. His greatest joy, however, was spending time with his beloved family. His kind and loving disposition will be greatly missed. While physically separated from us, his spirit will live on through our fond memories. Memorial services will be held at 10 am, Saturday, July 16, at the Coralville United Methodist Church. There will be a visitation time 30 minutes prior to the service and additional time for fellowship following the service. Mask will be required for the services and fellowship time to follow. In lieu of flowers, memorial donations in his name can be made to the Coralville United Methodist Church.