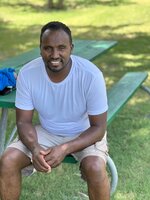 Wegayewu S. Faris, age 42, of Coralville died Friday August 5, 2022, of an apparent drowning. Funeral services will be held at 1pm, Friday, August 12, 2022, at Gay & Ciha Funeral and Cremation Service with burial to follow at Ridgewood Cemetery in North Liberty. Visitation will be from 11am until service time at the funeral home. In lieu of flowers, a memorial fund has been established for the well being of his children’s futures. For a complete obituary, to share a thought, memory or condolence please visit Gay & Ciha Funeral and Cremation Service website @ www.gayandciha.com. Wegayewu Sahilu Faris was born May 5, 1980 in Ethiopia, the son of Sahilu Faris and Mulu Tolosa. He attended schools in Ethiopia, then moved to the United States in 2004 settling in the Iowa City area. Here he attended Kirkwood Community College. He married Teyobesta Tewabe on February 16, 2018, here in Iowa City. For many years he has worked at City High School where he developed long lasting friendships with staff and students alike. Wegayewu loved to be outside, enjoying camping, fishing, landscaping and playing and watching soccer, but near and dear to him was his family, especially his four children! His family includes his wife, Teyobesta; their children, Zackarie Porter, Samuel, Nebyat and Lucas; brother, Abusha Faris; sisters, Banchu Sahilu (Getnet) and Kere Sahilu (Wobishet) and a number of nieces and nephews. He was preceded in death by his parents and 1 brother. He will be dearly missed by all those that knew him.