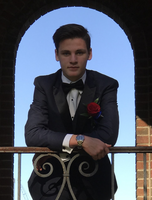 Jackson Henry Meyer died in a tragic climbing accident in Zermatt, Switzerland on Saturday, August 13. He was twenty-two years old. Please join Karen, Maxwell, Lewis and Rebecca to celebrate and honor Jackson on Sunday, August 21 at the City High Turf at 7 PM. The family will have a private burial at a separate time. We are thankful to other hikers and Swiss support team for returning Jackson back home to us. Jackson knew from a young age what he wanted, and he lived his life making his visions his reality. In pre-school, he wanted to be Batman and did so by wearing the same gray costume for months and insisted to be called Batman. He wanted to be the fastest 6th grader in the 200 meter dash at the All-Elementary Track meet, and he was. He wanted to be a valedictorian at City High School in 2018 and he did it while taking honors and AP classes throughout. He wanted to play Division I Soccer and attended Drake University as a student-athlete earning a double degree in computer science and mathematics in just 3 years. He wanted to climb to the top of every highest peak in Europe and he was well on his way. The final peak Jackson summitted, well above 14,500 ft, was located near Zermatt, Switzerland. Above all else, Jackson wanted to be a great soccer player. He began playing as a tot and quickly turned into a lightening fast, skillful scoring machine. Along with his two best elementary school soccer buddies, JC and Jonah, they moved from recreational to competitive, year-round soccer around age eight. It was at the Iowa Soccer Club (ISC) that Jackson met his first and longest soccer coach: Jon Cook. They shared a bond that was truly special and Jackson loved and respected Jon like no other. Jon’s love for the craft and skill of the sport and his YEAR-ROUND dedication propelled Jackson to reach his goal of being a great soccer player. The Inferno team, for ten wonderful years was Jackson’s second family. Karen’s, too. Jackson found his way onto the City High Varsity Soccer Team as a freshman. He loved the international coaching style of Jose, and that he let him be #10 his senior year. He loved the brotherhood of the City High teams he played on for four years, each a little different from the year before. Karen, his mother, Maxwell, his twin, Lewis, his little brother, and Rebecca, his sister are heartbroken at the loss of their beloved Jackson. To honor his memory, donations can be made to the ISC Financial Assistance Program by visiting this link: https://register.htgsports.net/default.aspx?id=10835 or by sending a check to the following address: ISC Financial Assistance 2325 James St. #8 Coralville, IA 52241 Jackson is now in the loving care of his dad, Bruce, his grandparents, Don and Deloris and his forever best friend, JC.