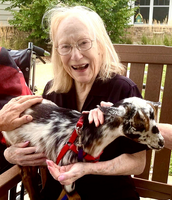 Shirley D. Means, age 91 formerly of Alton, Illinois died Friday, September 2, 2022, at the Highland Ridge Care Center in Williamsburg, Iowa where she has received amazing compassionate care from all the staff and Essence of Life Hospice. Shirley was the daughter of George Bailey and Edith Wisdom Bailey, born on a farm in West Alton, Missouri, November 10th, 1930. She attended West Alton grade school and moved to Alton, Illinois to attend Alton High School. She became a Registered Nurse at Alton Memorial Hospital and worked at a number of area hospitals, including Alton Memorial and St. Elizabeth’s in Belleville. After certification as an addiction counselor Shirley was director of the detox and rehab program for Madison County Council on Addictions for a number of years. Shirley married Lourn T. Means, Jr. on November 28, 1953. He passed away February 15, 1967. She was proud of the two sons from this union, Mark T. Means (Evelyn) and Scott A. Means formerly of East Alton (deceased 2015). On Valentines Day 1975 she married Maurice K. Means, the younger brother of her first husband. They lived in Rosewood Heights for 40 years until the death of Maurice in 2015. Shirley then moved to Iowa to be closer to her remaining son, Mark, where she resided until her passing. Shirley was a caring and compassionate nurse but also was very active socially, particularly with arts and crafts and volunteering. She was always looking for a new artistic challenge and won a number of local art competitions in different media. She was a member of the Sweet Adeline’s and volunteered at the Fox Theater and Oasis Women’s Center. She and Maurice had many friends and regularly attended dances at the the Wood River Moose Lodge as long as they were both able. Shirley also valued physical fitness and would regularly go to Leisure World as well as ride her bicycle along the River Road, long after the family thought it was safe for her to do so. And her love of animals was well known to anyone that knew her, though her choice of these animals was sometimes on the interesting and unusual side thanks to the adoption of varous critters by her sons. She also enjoyed traveling around the United States and abroad, notably to England, Europe and China. After moving to Iowa she lived at Highland Ridge Retirement Community and became a favorite among the staff and other residents for her ready smile, sassy wit and loving nature. She will definitely be missed by all. She was predeceased by parents, both husbands and younger son Scott. Shirley is survived by her elder son Mark, his wife Evelyn; stepdaughter/niece Carol Osburn and her son Nick Osburn (Stephanie). To share a thought, memory or condolence with Shirley’s family please visit Gay & Ciha Funeral and Cremation Service website @ www.gayandciha.com. In lieu of flowers, donations to Essence of Life Hospice @ 3207 220th. Trail, Amana, IA 52203