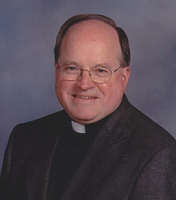 Rev. Tim Zimmermann, 78, of Iowa City passed away Monday, September 5, 2022, at The Bird House-Hospice Home of Johnson County. Funeral services will be held at 10:30 am, Friday, September 9, 2022, at Our Redeemer Lutheran Church in Iowa City, where visitation will take place on Thursday from 4 to 7 pm. Funeral services will be livestreamed on Friday through the church and can be viewed by visiting this link: https://www.youtube.com/watch?v=uxfT2Xsxs94, or by clicking the drop down menu that says, "Reverend Timothy Zimmermann's Funeral Service - Livestream" on this page. Graveside services will be Friday afternoon at 3 pm at the Shiloh Cemetery in Wellsburg, Iowa. Timothy John Zimmermann was born to Rev. John and Mae Etta (Wheat) Zimmermann on March 10, 1944, in Montevideo, MN. He was baptized by his father on April 16, 1944. In 1948 Tim moved with his family to Eldora, IA, where his father served as pastor at St. Paul Lutheran Church, the church where Tim was confirmed (1958), married (1967) and ordained (1970). He attended Concordia Academy in St. Paul, MN his last two years of high school (1961-1962) and Concordia Junior College in St. Paul, MN (1963-1964) before attending Concordia Senior College in Ft. Wayne, IN, graduating with a BA degree in 1966. He received his pastoral training at Concordia Seminary in St. Louis, MO (1966-1970) with his vicarage year being spent at St. John-Nottingham, Cleveland, OH. He graduated from the Seminary with an M. Div. degree in 1970. Tim spent his entire career as a parish pastor in the Lutheran Church-Missouri Synod. His first call was to Our Savior Lutheran Church, Odell, NE, where he was circuit counselor and a volunteer firefighter. In 1976 he took a call to St. John Lutheran Church, South Euclid, OH, where he also served on the board of Cleveland Lutheran High School East. In 1984 he accepted the call to Trinity Lutheran Church, Jefferson, IA, where he led the community CROP walks and served several years as part-time Social Ministry Executive for Iowa District West. In 1993 he began his ministry at Our Redeemer Lutheran Church in Iowa City, IA, retiring in 2010. In 2006, he had the unique privilege of teaching Theological Education classes to seminary students in Bishkek, Kyrgyzstan, while on a mission trip with members of Our Redeemer. On December 27, 1967 Tim married Carol Ann de Neui, originally from Wellsburg, IA. They were blessed with three children; Mark Zimmermann of St. Louis, MO, Jonathan (Julie) Zimmermann of St. Charles, IL, Leah (Mike) Degenhardt of Brookfield, WI, and five grandchildren: Olivia, Mary Emma and Jonah Zimmermann and Claire and Simon Degenhardt. He was preceded in death by his parents, his in-laws, Abe and Clara de Neui, his sister Ann Thompson, brothers-in-law Dick Thompson, Ronald de Neui, and Alfred Janssen. He is survived by his wife of over 54 years, Carol, his sister Pam (Rev. Curt) Peters, brothers Rev. Bruce (Mary) Zimmermann and Rev. Fred (Carol) Zimmermann, his sisters-in-law Kathleen Janssen and Karen de Neui, his children and grandchildren. Memorial gifts may be given to Our Redeemer Lutheran Church in Iowa City or Concordia Seminary in St. Louis, MO.