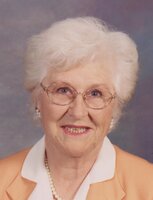 Wyonna M. Hartwig, age 95 longtime resident of Iowa City died Friday, September 9, 2022, at the Bird House-Hospice Home of Johnson County. Funeral services will be held at 1 pm Tuesday, September 27, 2022, at Gay & Ciha Funeral and Cremation Service where there will be a time of visitation from 11am Tuesday until service time at the funeral home. Burial will be at the Oakland Cemetery in Iowa City. Memorial donations can be made in Wyonna’s memory to Iowa City Hospice or to The Bird House - Hospice Home of Johnson County. To share a thought, memory or condolence please visit Gay & & Ciha Funeral and Cremation Service website @ www.gayayandciha.com. Wyonna Muriel Collins was born January 21, 1927, on a farm in Tama County north of Elberon Iowa. She was the only child of William James Collins and Sadie Weaver. Wyonna lost her father in 1931, due to a farm accident. She attended school in Elberon and later Iowa State Teachers College in Cedar Falls. After graduating she returned to Elberon to teach elementary school. At a dance in Chelsea, she met David Hartwig, home on leave from the Army Air Corp. The couple continued dating until they married on June 1, 1948. Wyonna was mother to four sons, Kevin, Randall, Gregg, and Marc. Along with her busy life raising four sons, she was a constant support to Dave in the business and as he ventured out from Clutier. After a short stay in Omaha when Dave worked for Chrysler Corp.the family moved to Findlay Ohio. In 1961, the family made their last move to Iowa City when Dave and his brother Marv purchased the local Dodge dealership and later added the Jeep dealership. Iowa City truly became home to Wyonna as she became actively involved in the activities of her four sons. After the boys were in school, she volunteered for many years at Mercy Hospital. She was a long-time member of the First United Methodist Church. She lived the last decade of her life at Legacy Senior Living. She had many wonderful friendships in Iowa City and later at Legacy. She always had a smile, kind words and support for her friends around her. She will be greatly missed by her friends and family who loved her dearly. Wyonna is survived by four sons and their wives, Kevin and Anita Hartwig, Randall and Jan Hartwig, Gregg and Angie Hartwig all of Iowa City and Marc and Sharon Hartwig of Cave Creek, AZ; grandchildren, Kory Hartwig, Kerri (Josh Letsis), Nicholas Hartwig, Alison Hartwig, Hannah Gerard and Adam Gerard; two great-grandchildren, Roman Letsis and Jett Letsis and sister-in-law, Sally Mathis Hartwig. Wyonna was preceded in death by her parents and husband, David.