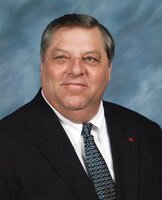 Kenneth J. Hartman, Sr. age 77 of Blue Grass, Iowa died Sunday, September 18, 2022, at the Clarissa C. Cook Hospice House in Bettendorf, Iowa. Funeral services will be held at 1:30 pm Saturday, September 24, 2022, at Gay & Ciha Funeral and Cremation Service in Iowa City where there will be a time of visitation beginning at 12 noon. Burial with military honors will be at the Memory Gardens Cemetery in Iowa City. To share a thought, memory or condolence please visit the Gay & Ciha Funeral and Cremation Service website @ www.gayandciha.com. In lieu of flowers memorial donations can be made in Ken’s memory to The Salvation Army, Wounded Warriors Project or Humanitarian Efforts in Ukraine. Kenneth John Hartman was born August 30, 1945, in Boone, Iowa, the son of Kenneth M. and Viola (Doran) Hartman. Following graduation from high school he attended and graduated from the University of Iowa. He later graduated from St. Paul School of Theology. He has enjoyed many life professions throughout his years, from serving in the United States Air Force and Army, and later the Iowa National Guard; to developing his own company, Telecommunications Diversified Services, Inc. (TDSI). Ken served as Mayor and on the Boone City Council, and taught at the Iowa Law Enforcement Academy, and several Community Colleges. Ordained in the Church of God of Prophecy, later in the United Methodist Church, he pastored many churches in his career. Ken served as Chaplain for the Bettendorf Police Department and worked for MCI in California. A man of strong faith, he was always wanting and willing to share the word of Christ with anyone. Many souls have attributed their paths to Ken’s guidance along the way. Ken enjoyed writing poetry and music, singing, playing guitar, piano, and keyboard. He was passionate about reading Scriptures, writing Bible studies, preaching and working with children and youth. His family includes his wife, Lorraine J. (Roth) Hartman; a sister-in-law, Linda J. (Roth) Hemminger and her husband, Bruce, brother-in-law, Gregory E. Roth; their children, Jeffrey D. Hemminger and his wife Helkei, Daniel R. Hemminger and his wife Kimberly, and Ethan R. Roth; and grandchildren, Lexi and Tucker Hemminger. Ken has two sons, Dr. K. John Hartman Jr. and his wife, Lori, and Gabriel E. Hartman and his wife, Rieko; grandchildren, Emma, Christin, John James “J.J.” and Ryan. He was preceded in death by his parents, a sister, Sandra Kay Price and her husband, Doyle, and his former wife, Susan.