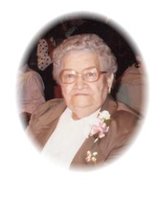 Ada Pauline Langenberg was born on December 18, 1911 in North Liberty, Iowa the daughter of Frank E. and Clara K. Paintin Bowman. In 1930 she married Edmund Ned J. Langenberg at St. Marys Catholic Church in Iowa City. Her family includes three daughters: Marjorie and husband Frank Floerchinger and Rosmary and husband Bill Maske of West Branch, Kathleen and husband Henry Rios of Solon, two sons: Edmund Ron and wife Johnita Langenberg of Tiffin and Larry Langenberg North Liberty, fourteen grandchildren and twenty six great-grandchildren, a sister: Doris Graham of Solon and a sister in-law Maxine Bowman of Iowa City along with numerous nieces nephews and cousins. She was preceded in death by her parents, husband, three brothers, one sister and one granddaughter. She attended Tiffin Schools and was a member of the womens basketball team at Tiffin High School; she then switched to University High School in Iowa City. Ada was a mother and homemaker for her family as well as helping on the familys farm. She and Ned farmed near Tiffin until they moved to town in 1967. After her children had grown she worked for the University of Iowa Hospitals and Clinics as a housekeeper until she retired. In 1999 she moved to the Crestview Nursing and Rehabilitation Center. Ada was a fan of all University of Iowa Athletics; her favorite was womens basketball. She attended many games, often times she would travel to different schools to watch her Hawkeyes. For many years she was the caretaker of the Oak Hill Cemetery in Tiffin. She enjoyed the mowing and maintenance of the cemetery in which she took great pride. Reading, playing cards, solving puzzles, needle work and crocheting were a few of her many hobbies. Her family will remember her ability to communicate with just the point of her index finger. With a simple point and facial expression she could speak volumes, she will be missed by her family and friends. In lieu of flowers memorials may be given to the Ada P. Langenberg Memorial Fund.