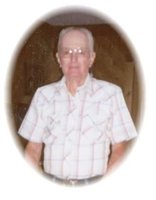 Edward L. Eddie Kiracofe, age 82 of rural North Liberty, died Friday, February 20, 2004 at the Colonial Manor Care Center in Amana. Funeral services will be held 1:00 p.m., Tuesday, February 24, 2004, at the Oxford United Methodist Church with the Reverend Diane Townsley officiating. Burial will be at the Babcock Cemetery, rural North Liberty. Visitation will be from 4 to 8pm Monday and after11:00 a.m. Tuesday until services at the church. A memorial fund has been established in Eds memory. Edward Libarius Kiracofe was born July 31, 1921, near Keota, Iowa the son of Elmer and Tillie (Conrad) Kiracofe. During WWII, he served in the United States Army. On November 24, 1962, he married Nelda M. Eden at the Little Brown Church in Nashua, Iowa. The couple armed in the North Liberty area most of their married lives. Eddie was a member of NFO, Swisher American Legion and Farm Bureau. He enjoyed watching NASCAR racing, doing crossword puzzles, collecting Farmall model tractors, loved his Chevys and motorcycles in his day, and was always up for going out to dinner with friends. His family includes his wife, Nelda; sisters and their husbands, Margaret and Frank Novak of Oxford, and Loretta and Cecil Grimm of Millersburg, Iowa; sisters-in-law, Dorothy Kiracofe of Swisher, Josephine and her husband, Allen Balvin of Cedar Rapids, Velma Eden of Cedar Rapids, Elva and her husband, Myron Herman of Harper, IA, Bonnie and her husband, Edward Kubik of Walker, IA, Judy and her husband, Bob Sokup of Hiawatha, Rachel and her husband, Dean Willis of Marion, Juanita Eden of Framingham, MA; Becky and her husband, SteveVlcko of Fairfax, and Kay Eden of Fairfax; and numerous nieces, nephews, and cousins. He was preceded in death by his parents, step-mother, Tracie Cupp Kiracofe; brother, Flavian, and brother-in-law, Calvin Eden. Gay & Ciha Funeral and Cremation Service of Oxford and Iowa City is caring for Edwards family and his services.