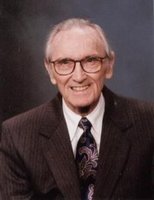 Burton O. Jones, 86, formerly of Williamsburg, died Friday, April 8, 2005 at Oaknoll Retirement Residence, Iowa City. Services will be held 10:30am, Tuesday, April 12, 2005 at the First Presbyterian Church, Williamsburg. Visitation will be from 9:30am until service at First Presbyterian Church. Burial will be in the Oak Hill Cemetery, Williamsburg. Memorials may be given to St Lukes Health Care Foundation in Cedar Rapids. Online condolences may be sent to the family through our website @www.gayandciha.com. Burton was born June 14, 1918 in Williamsburg, Iowa the third child of Owen G and Mary (Hakes) Jones. He was graduate of Williamsburg High School and went on to attend the University of Iowa, AIB Business School and the St. Louis School of Mortuary Science. He joined his fathers business in 1939 and for 35 years owned and operated the Jones Furniture Store and Jones Funeral Home in Williamsburg. He served in the U.S. Navy during World War II entering in 1943. On September 16, 1940 he married Ramona Simmons from Marengo, a marriage that would last 64 years. He was member of the First Presbyterian Church of Williamsburg. Mr. Jones was well known throughout Eastern Iowa for his strong Welsh tenor voice and sang for many funerals and entertained at numerous weddings and special occasions. He was a member of the award winning Father and Son Quartet, a barbershop quartet that sang for many event and dignitaries. Burtons family includes his wife of 64 years, Ramona Simmons, a resident of Oaknoll Retirement Residence, Iowa City, a son, Dr. Rhys B Jones and his wife Valerie Chittick of Iowa City, a daughter Bronlyn Jones and her husband, Robert Bauer of Providence, Rhode Island, four grandchildren, Isabel and Owen Jones of Iowa City, Angela Plagmann of Orlando, Florida, Curtis Bauer of Iowa City, and two great-grandchildren, Kaila and Cetera Plagmann of Orlando, Florida.