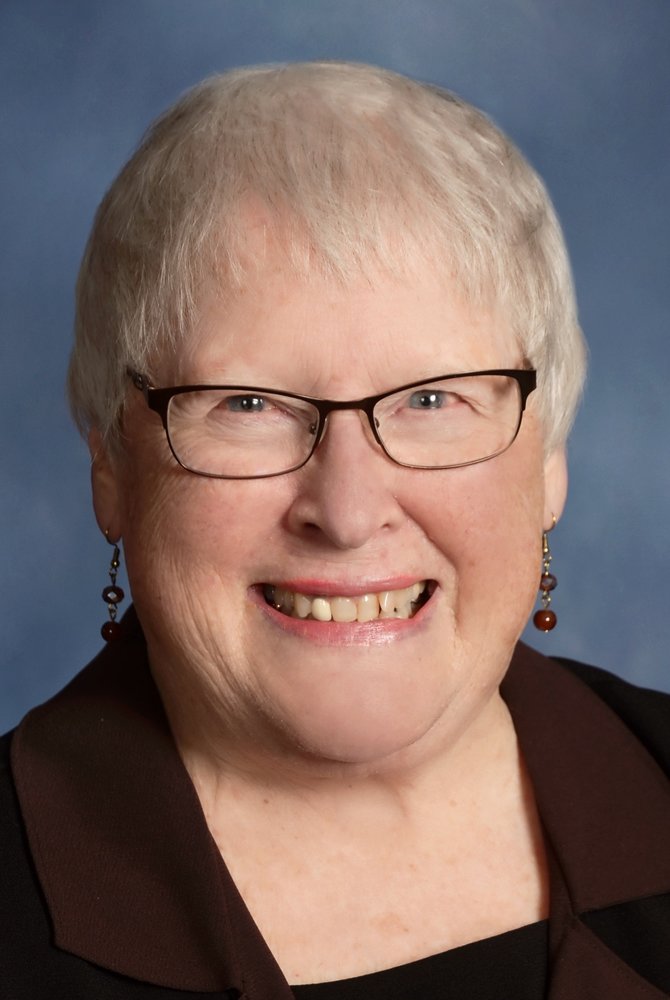 Visitation will be at 1-2:30 p.m. on Sunday, March 3, followed by a memorial service at 2:30 p.m., both at First Presbyterian Church in Iowa City. There will also be a Celebration of Life Saturday, March 2, from 1-3 p.m. at the Grand Living at Bridgewater facility where she resided, located at 3 Russell Slade Blvd., Coralville, IA. In lieu of flowers, the family suggests memorials in Jan’s name directed to the Iowa City Hospice at iowacityhospice.org.

Jan was born in 1941 in Sheldon, Iowa, the daughter of Bruno “Joe” Boll and Edith (Wolf) Boll. She grew up in Sheldon until moving to Sioux City her junior year in high school, graduating from Sioux City East in 1959. While in high school Jan played clarinet in the band, was on the Cheer Squad and played basketball. Her favorite childhood memories were on the farm of her Aunt Dorothy and Uncle Abe just outside of Sheldon.

Jan trained as a nurse, graduating from the University of Iowa with her LPN license and going to work for University Hospitals at age 21. She married Herbert Alan “Al” Wicks on September 8, 1962, in Morningside Lutheran Church in Sioux City, IA. They moved to Sioux City and she worked at the Lutheran Hospital before moving to Dayton, Ohio, in 1964 and then returned to Iowa in 1965 to Cedar Rapids and then a year later returned to Iowa City where she went to work for a brief time at Mercy Hospital. She took 13 years off to raise her children and provide child care for others. In 1974 she returned to nursing at University Hospitals in Iowa City for 23 years, 17 of which were third shift in the newborn nursery. She was transferred to the University’s OB GYN Clinic for the final seven years before retiring in May 2001.

Jan was a member of the Old Capitol Kiwanis Club, where she served on the board and was involved with the Kiwanis K-Kids. She was also a life-long volunteer, helping out with numerous organizations, activities and causes. She was a Cub Scout and Webelos Den Mother, and most recently with the Salvation Army and Meals On Wheels. Both she and Al were Deacons and Ruling Elders at First Presbyterian Church in Iowa City and 50-year members of the congregation. She was a Bible School teacher and secretary of her church Women’s Circle.

Her real passions, though, were her love of Iowa Hawkeye sports and as a foreign exchange student host and program supervisor for the Iowa City area. She and Al hosted 23 different students, as well as six graduate students, while overseeing some 180 exchange students over their 28 years with the Education Foundation (EF) program. In addition, their involvement with EF and the exchange students led to a dozen different trips abroad in which Jan and Al visited Norway, Sweden, Denmark, the Netherlands, France, Germany, Austria, Switzerland, Italy, the Czech Republic and Japan. They loved learning about the different countries and traditions, as well as introducing their students to America. They retired from EF in 2014.

She was proceeded in death by her parents.