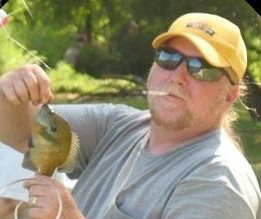 James had a full life, if a short one, where he did everything from chasing storms and traveling the country, to construction, and becoming a career chef. He married Connie Batterton (Vrchoticky) on July 6, 2002, and started on a journey that included raising three stepsons, moving to the small town of South English, and co-opening a cheesecake bakery in Sigourney, IA with his wife. From his three stepsons, his biological children, and all of the neighborhood kids, blood wasn’t a barrier for James who accepted many as family. If you knew James, you could count on him to give you the shirt off his back, the money out of his pocket, or the time from his day when you were in need. He’d have given anything for family and often gave more than he needed to. He enjoyed nothing more than gathering with his loved ones for a family meal or a night of pool, and few things brought a smile to his face like the tug of a catfish on his line. James had a way of making people laugh through his sheer enthusiasm for dorky jokes and through his general goofiness.

James was preceded in death by his mother, Carol, and his sister, Faye. He is survived by his three brothers; Berry, Oscar, and Tony; his children (step [Vincent, Nicholas, and Richard], biological, and adopted); and his many grandchildren.

Due to his wishes, James has been cremated and no funeral will be held. A small immediate family gathering will be on Friday, March 15.