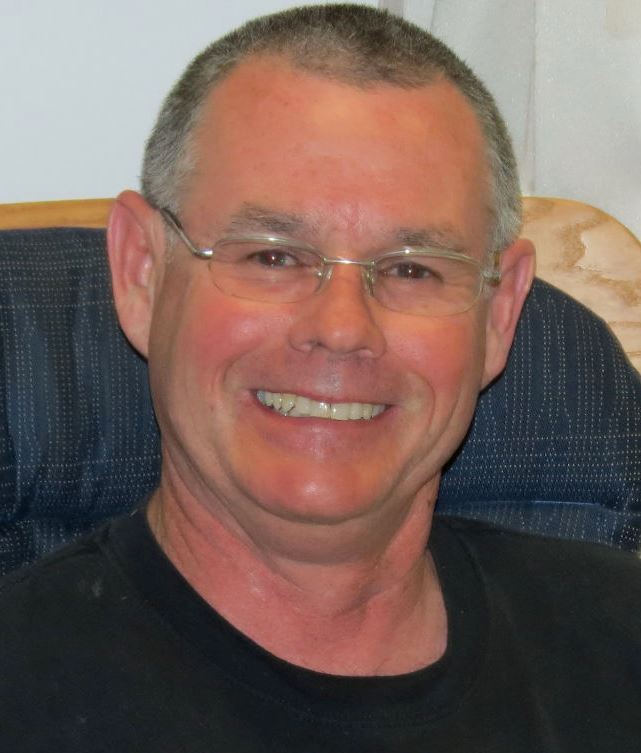 Bradley Eugene Gilpin, 62, of Iowa City died on November 5, 2019 after a hard-fought battle with cancer.

Brad was born in 1957 to William and Joan “Hotie” Gilpin. He grew up in Coralville, attended Coralville Central and graduated from West High School in 1975. The Gilpin family spent many hours on the Iowa river water skiing, boating, and floating down the river. The 4th of July was a favorite holiday for our family. We had big family barbecues, set off fireworks Brad had purchased in Missouri, and watched the city fireworks display from the pontoon boat on the river. We heard fireworks near the Bird House shortly after Brad passed which was a special moment.

Brad met his future wife Deb in 5th grade and they started dating in 9th grade, after getting to know each other through swimming and ice skating at S.T. Morrison Park in Coralville. The high school sweethearts married in 1977 and they welcomed their first child, Alysha, in 1978. Their family continued to expand, welcoming Meghan in 1979, Katie in 1982, and twins Abbey and Andrew in 1984. In 1990, Brad and Deb welcomed their sixth child, Nathan, and their large family was complete.

One of Brad’s most outstanding characteristics was the work ethic he learned from his grandfather and father. When he was 14 years old, Brad started working at the family business, Gilpin Paint & Glass. As an adult, he worked at Audio Odyssey, the paint store, and finally at McComas Lacina as a cabinet maker until spinal surgery forced his retirement in September of 2018. Those who shopped at the paint store likely saw Brad with little notes taped to his shirt; reminders of things he needed to complete throughout the day.

Brad was a long-time member of the choir at St. Mary’s Church, an avid Cubs fan, and he loved tailgating for Iowa Hawkeye football. Upon learning there were no more treatment options for his cancer, the first thing he said was, “I hope I can make it to a tailgate in the fall.” And make it he did! He was able to enjoy two tailgates during the 2019 season and there were many, many people who were glad to see him there.

Brad had an innate ability to make friends wherever he went and he loved to tell jokes to anyone who would listen. There must have been an area of his brain dedicated to remembering jokes, because he knew and told many. He maintained his sense of humor and was cracking jokes until the day before he passed. Brad loved giving people nicknames, including some of daughter Abbey’s closest friends, and Brad became known as “Bob” in the inner circle. When the family would go on road trips and Brad got a little off route, the family was never lost, just “on an adventure” - an outlook that was reflected in how Brad approached many different unexpected things in life.

Brad loved a variety of music - classic rock, country, and to his children’s horror even The Lawrence Welk Show and the yodeling “talents” of Don Walser. He and Deb introduced their children to all of the classic musicals, which they would borrow from the library and sing along to. The week before Brad passed, he spent time sitting with his family around the kitchen table listening to music and in the last few hours of his life, his family sang him songs to lift his spirit and bring him comfort.

When Brad was young he honed what he called “stupid human tricks”. Some of these included: doing headstands on top of a chair (all of the coins fell out of his pockets and his kids happily picked them up); playing a melody on his head with a mallet, silly handshakes, and questions like: can you poke your head through this hole? Can you stand on one finger? He entertained us with sound effects: he did a chainsaw, Donald Duck and mimicked truckers talking over CB radio.

If you’ve ever heard the term “Iowa Nice,” Brad might be one of the first people you’d think of. When he wasn’t at work or spending time with family, Brad often helped friends and relatives complete projects. Plumbing, carpentry, wiring, stereo installation, mowing, shoveling...Brad did them all. His creativity and problem-solving skills aided many.

Brad coined the term “Gilpingenuity,” and the best way to explain what that means is with a few examples.

- Removing the top of an oscillating fan from its broken base and attaching it to a music stand so it would be adjustable.

- Wiring up several of his junky cars to start without a key. One had a red button to push, another started by flipping a light switch. He did something similar with a lawnmower so it would start by running a cordless drill after the pull cord broke.

- Gno Gnats: A visor with window screen attached to keep gnats away when mowing the lawn.

- Most recently when his mobility was limited, Brad installed a night light on top of a fan so he could tell when it was on from across the room.

Brad found joy spending time with his three grandchildren: Henry (7), June (4), and Julia (2 1⁄2). Henry and Grampa spent many hours in his junky garage picking up bottle caps, pop tabs, and taking apart microwaves and saving the magnets. Brad bought Henry a nice set of tools last Christmas and Henry loves those tools. All of the grandchildren enjoyed getting ice cream with Grampa, having inside jokes, going to the airplane shows and pancake breakfasts. Brad made his grandchildren special gifts out of wood as well. For Henry’s first birthday he made a beautiful wooden step stool. He also made beautiful toy chests for Henry and June. We all marveled at the designs he created and the many hours of love he poured into those gifts. They will be cherished always.

Brad loved spending time in his garage. He built and fixed countless items, drank beer, watched TV, and had great conversations in his garage. Before he passed, an oxygen tank by his side, Brad spent numerous hours out there, sorting and cleaning his tools and other treasures to be used by loved ones in the future.

“Christmas in July” for Brad was the week before apartment turnover. He loved finding discarded items he could save from the landfill. The term some would use for this activity is “dumpster diving.” Several of Brad’s children recall riding along during his “curb mining” sessions. The trip would usually begin with Brad enthusiastically shouting “saddle up, divers!” Passengers would fulfill the role of Curb Scanner, inspecting piles of stuff to see if they should stop for a closer look. When the car came to a stop, Brad would shout, “divers dismount!” Items worthy of pick-up were called “curb gems” or “dumpster diamonds.” “DDs,” as he called them, included mini fridges, microwaves, stereo equipment and TVs. Part of Brad’s process involved writing the “date of rescue” on the items. If you received an item from Brad, you’ve seen his inscription. By the age of 12, his youngest son Nathan was afforded the luxury of a bedroom containing a big screen TV, DVD player, surround sound, and every video game console released prior to 2001, all for free.

He was preceded in death by his father William Gilpin.

A Celebration of Brad’s Life will be held on Friday, November 15 from 4-8 pm at the Park Lodge at Terry Trueblood Recreation Area. At 6 pm members of the St. Mary’s choir will sing a couple songs, with time for guests to share stories and memories about Brad to follow.

The family wishes to thank the wonderful staff at the UIHC Holden Cancer Center, Hospice Home of Johnson County (the Bird House) and Iowa City Hospice for their compassionate care.

In lieu of flowers, the family requests donations be made to one of the entities listed above, or to the Iowa City Animal Shelter & Adoption Center.