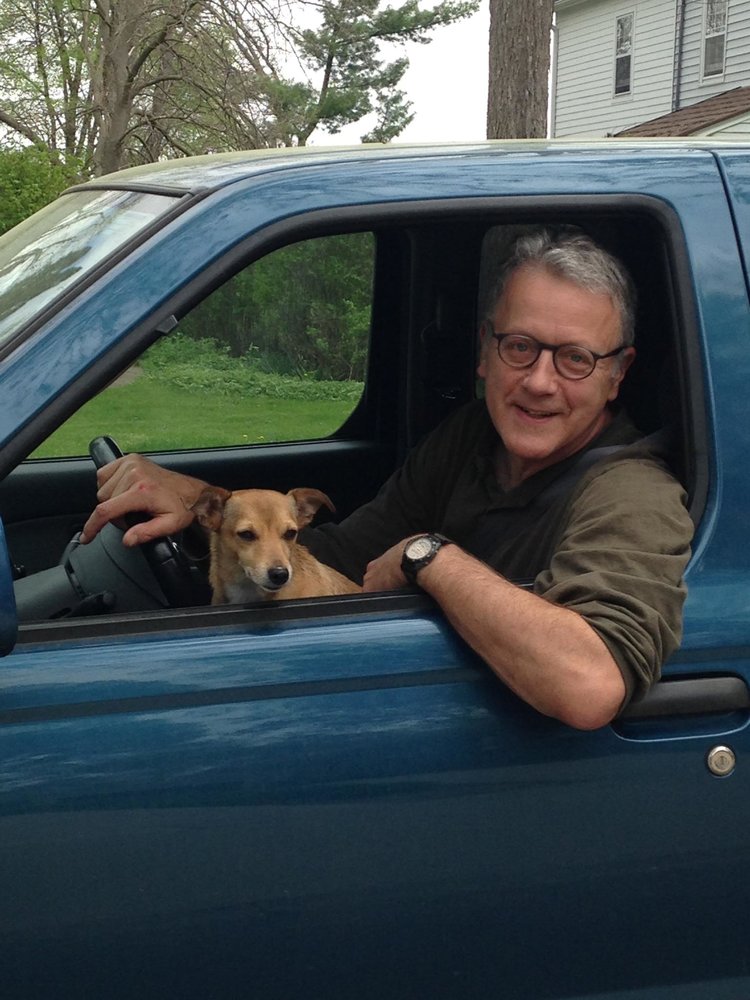 Jim Majusiak died 20 months after being diagnosed with pancreatic cancer.

In gathering our thoughts for this tribute we asked those who knew and loved him best for favorite memories and anecdotes. We found that a few themes emerged over and over. First, Jim was an amazingly loving and loyal friend and family member. Second he was extremely smart, curious about, and involved in the world. Third he loved the outdoors. We could go on—his sense of humor cherished by all who knew him, his love of jazz, and cooking, rescue dogs and dancing, his prowess as a gardener (admired throughout the neighborhood)…..As one close colleague put it, “I am sorry that Jim’s life was cut short but I can say that Jim lived far more than most people who have lived longer.”

Jim was born June 9, 1953, in Hazelton, PA, and the family moved to Watertown, SD, a few years later. He was the sixth of 10 children of Joseph and Olga (nee Levkulic) Majusiak, a big happy Catholic family and owners of Watertown Flowers, the local flower shop. Of the early years, Jim’s sisters remember, “we didn’t need friends to come over…We WERE friends as well as siblings! There were so many of us that we ALWAYS had someone to play with. There were the usual sibling rivalries. One sister recalls, “Jim was the older brother who my teachers always commented on, as in “Oh! You’re Jim’s sister!” He, of course was academically accomplished so there was a lot to live up to.”

Jim’s intellectual abilities were evident early. In high school, he was Student Council President and an exceptional student, especially in science and math. As a high school junior in 1970, Jim was very involved in organizing South Dakota’s first Earth Day event, part of the first Earth Day celebration across America, the first glimpse of what would be a life-long love of the natural world, and its conservation.

Jim left Watertown for the University of Oregon. While he majored in biology and eventually moved on to medical school at Oregon Health and Science University in Portland, his friend Tom remembers that they were not at all sure at that time that they would spend their entire lives working in medicine. “Jim could carry on interesting conversations about politics, sports, religion, and the arts.  He loved the out of doors but also loved the inside of an auditorium or a museum. He liked learning. I could have seen him as a college professor.”

As it turned out, however, Jim did spend his life dedicated to saving others’ in the ER at Mercy Hospital in Iowa City. Jim was a compassionate healer, a lifelong inquisitive medical scientist, and was thrilled when he excelled as a diagnostician. He loved to pass his knowledge on to the medical students and residents under his tutelage.

What Jim excelled at even more than his work, however, was relationships. Everyone agrees that when Jim became your friend, you had a friend for life. “Friendship with Jim” one wrote, “was something time could not erase.” Although he never had children, he showered his many nieces and nephews with love. He took them on trips and adventures. According to his nephew Rich, “When you spent any amount of time with Jim, you’d feel like you were most important person in his life at that moment.” On biking trips and white water rafting escapades, he would regale them with stories and jokes, maybe even teach them a completely useless Polish phrase or two (I’m waiting for my breakfast!).  Another nephew, Jesse, recalls that as a 13 year old they did RAGBRAI together. Other adventures ended with them hiding under a log during a lightening storm or upside down in the white water of Idaho. “You learn things from your Mom and Dad, but you can learn a different set of life skills from an amazing uncle,” says Jesse, “and Jim was most certainly that.” Jim often recalled that before being upside down in the white water, his nephews prefaced that day’s adventure with, “Now remember—safety second!”

Nephew Ben remembers a fishing trip they took together when he was 17. “He taught me many life lessons I’ll never forget. One of the things he taught me was to always carry a sense of humor. When we were leaving Canada, the border security was giving us a hard time about how we knew each other and if we were leaving Canada with anything we did not bring into Canada. Jim simply replied, “This is my nephew, and we are leaving with four walleye and a sunburn.”

Meanwhile his niece Alia played other games with Uncle Jim. With her childhood doctor’s kit, she would like to have Jim “fix her,” announcing emergencies like, “I have two broken arms and a broken leg and a BABY COMING OUT!” Alia currently plans to follow her uncle into the medical field, and last Christmas, Jim bequeathed her his stethoscope with her name engraved under his. Another niece Madeleine is a Ph.D. student in music at Indiana University and was the recipient of Uncle Jim’s beloved baby grand.

The Majusiaks will treasure fond memories of many a family gathering in Watertown and various camping/hiking trips in Arizona, Death Valley and the Sierra Nevada mountain range.  Nephew Byron recalls, “The most memorable thing about Jim is he would brighten up any room or group with his never-ending smile and contagious laughter.  My fondest memory is when hiking a trail, he would randomly stop and hop backwards on one foot with the other foot lifted up behind him, effectively backing into whomever was hiking behind him; "just to make sure everyone was paying attention”.

In Iowa City, Jim had a wonderful group of friends who took yearly wilderness trips for almost 30 years. Together they explored such places as Glacier, Big Bend, the Grand Canyon, Kings Canyon, Olympic, Death Valley and the Everglades National Parks. He will be missed enormously by those friends at their weekly “meetings” at the fire pit in the backyard having a fine spirit, a cigar and robust conversation about current affairs.

As in any life, Jim experienced his share of tragedy, losing his father and two siblings. During one of those painful experiences his sister recalls he would write letters and send her articles. One read: We have 86,400 seconds to each day, which is credited to us each morning and written off each night. It carries no balance. Every day opens a new account for you. There is no drawing against tomorrow so you need to make the most of today. Remember that time waits for no one. Treasure every moment that you have, and treasure it more because you shared it with someone special. Of Jim, she says, “I know he said he had no regrets about his life…that he had tried to live life fully. I think he did. It is a gift and an inspiration to us all that he did.”

Jim taught his wife, Rachel, the invaluable lesson of true optimism in the face of great challenge; of looking for the good instead of letting yourself become overwhelmed by the shadows. Fortunately, it will carry her through this terrible loss, as will the love of the Majusiak family, his final and greatest gift to her.

Needless to say, Jim will be sorely missed by his entire family, colleagues, and dear friends. We appreciate all the kind condolences and gestures of love and support. We invite anyone interested in making a donation in Jim’s memory to direct their gifts to either the Friends of the Animal Center Foundation (https://www.facf.org) where Jim met most of best canine friends, or to his beloved Jazz radio station KCCK (https://www.kcck.org).

Share Your Memory of
Jim
Upload Your Memory View All Memories
Be the first to upload a memory!